I've started a new series that's doing pretty well so far. It's called Lone Wolf, and it's got some hot gay werewolves in it for all to enjoy. The first story is Seduced by the Alpha. Check out the cover: 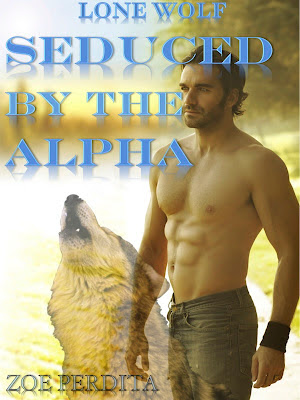 Here's the blurb and an excerpt:

Jake, a lone wolf and detective, moves to a small town in Idaho to get away from the city. Along with beautiful scenery he’s greeted by a powerful werewolf pack whose leader, Holden Walker, just happens to be his new boss. Jake’s not interested in pack life- but Holden won’t take ‘no’ for an answer. Can Jake fight off Holden’s advances even as his body begs him to give in? Contains: Rough and graphic gay sex, mild violence, oral sex and exciting anal stimulation.Excerpt:It was after midnight by the time Jake limped up to his house in his human form. Dark windows welcomed him, and as he turned the key in his lock a now familiar scent caught his nose. “What the hell-” Jake started as he reached for the light, but a strong body shoved him into the wall. “You’ve been running in my woods without permission,” Captain Walker growled in his ear, the heat of the other man’s body engulfing him. Jake snarled and pushed him back, and they both fell onto a pile of boxes, the loud smash of the lone wolf’s possessions filling the quiet house. “You didn’t have to chase me!”Scrambling for the upper hand, Jake raised his fist and swung, but the alpha moved just before the blow struck. “But you were so easy to catch,” Captain Walker said.A sudden punch to his stomach knocked all the wind from his lungs, and Jake coughed and held his bruised muscles. Damn. The man was stronger than he thought! Legs straddled his slender hips, the stiffness of Captain Walker’s erection pressed into his own. “I’ve caught you twice now. Are you going to join my pack or keep up this useless fight?” the man asked as he pinned Jake’s hands above his head.The hard wooden floor dug into his back, Holden’s musky fragrance filling his nose and adding to the throbbing need in his cock. Why did this turn him on? He hated that smug captain no matter how good looking the bastard was. But why did the fluttering start up in his stomach again? His heart pounding against his ribs like it was trying to break free from his chest? The man’s body on top of his felt right, but it wasn’t. Not at all!“I already said I’m not-” Jake didn’t get a chance to finish his sentence because Holden Walker kissed him, the alpha’s lips pressing into his with urgency. Jake’s mind reeled. He didn’t want to kiss the captain back, but his body wasn’t getting the message. His lips eased into the other man’s, his mouth parting to let the warm tongue inside to play. A prickling need built up over Jake’s entire body as the alpha’s mouth engulfed his. Hands traveled over his chest and groped at his pants, rubbing his hardened cock through his jeans. Jake gasped and rolled his hips into the touch. He shouldn’t like this. Why couldn’t he stop?

You can purchase it here:

Amazon
Barnes and Noble
Smashwords
All Romance  (it made the bestseller list!)
Rainbow Ebooks