The second installment of these series is Binding the Omega. More fun with Timothy and the mysterious Eurasian wolves! 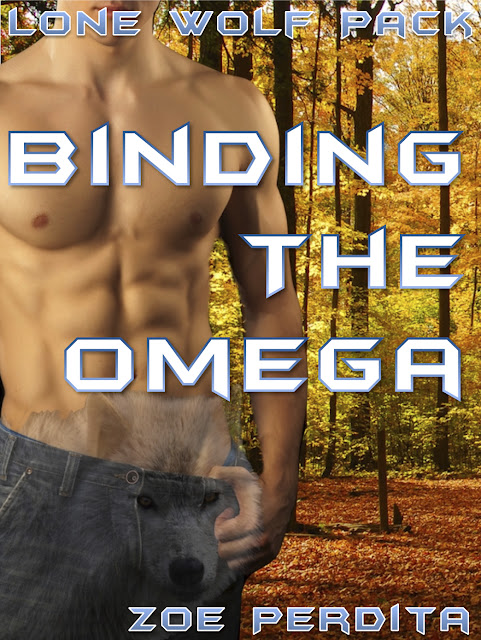 When the sexy Eurasian wolf, Gunner, and his half-brother Christian, moved to Timothy’s small Idaho town, he never imagined they’d be interested in an omega wolf like him. But after weeks of fooling around with Gunner behind his pack’s back, the guilt finally gets to Timothy. He has to break off their intense relationship and tell his pack about the rival wolves, but Christian has other ideas. Will Timothy confess to his pack or fall prey to Christian’s dominant desires?
This 7,000 word story contains graphic M/m sex including: seductive hand jobs, bondage, spanking, nipple play, ass play and heavy werewolf petting.

Excerpt:
Gunner kissed his cheek. “The offer still stands if you want the interview,” he said, and his slender fingers nudged at the band of the omega’s jeans, undoing the button.

"What are you doing?" Timothy gasped as the taller wolf unzipped the smaller man’s pants.

Christian leaned against the counter, crossing his arms. Why was he just watching?

"You can't tell?" Gunner asked and pulled Timothy's half hard member from his boxers. With just a few swift strokes the little wolf's cock hardened completely. Then Gunner’s other hand yanked up the omega's T-shirt, revealing his pale, wiry chest.

Timothy blushed furiously, his body writhing under his lover's touch and Christian's intense gaze. Why was the man staring at him like that? His mouth slightly parted, his full lips moist. What would it be like to kiss him? His cheeks were shaved smooth unlike Gunner's rough stubble. No! He shouldn't be thinking that. Not at a time like this!

Lips suckled at his tender flesh, bound to leave marks on his pale neck. Timothy moaned and Gunner stroked him faster, pinching his nipples cruelly and sending waves of excitement over the little omega's pleasure drowned body.

Suddenly, his lover stopped. Gripping the base is rock hard dick and rubbing his thick thumb over the tip. "Do you want to come, little wolf?" he asked and twisted Timothy's nipple, turning the pink nub dark red.

"Yes," the omega hissed, moving his hips and trying to get some traction on his needy cock.