After I finish each series, I bundle it at a slightly discounted price. Here's the Omega Affair Bundle with all the stories about Timothy and his sexy mates! 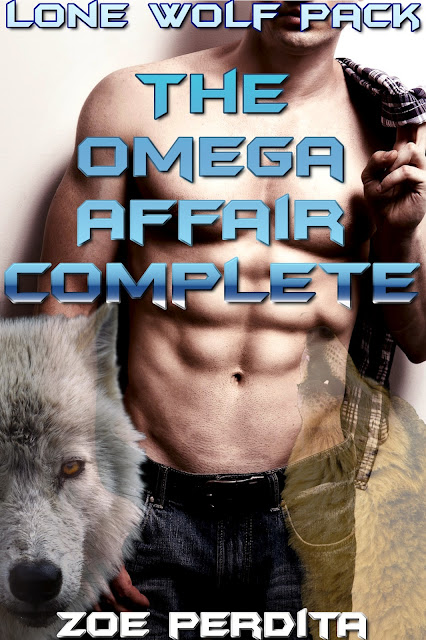 Timothy, the omega of his pack, assumes he’s never going to find a mate. Then a pair of Eurasian wolves move into town, and he can’t wipe the good-looking men from his mind. While the new wolves should be the enemy, Timothy can’t bring himself to tell his pack about them- even when one of them kisses him at work. Will the little omega dodge the sexy wolf’s advances or end up in his embrace?

When the sexy Eurasian wolf, Gunner, and his half-brother Christian, moved to Timothy’s small Idaho town, he never imagined they’d be interested in an omega wolf like him. But after weeks of fooling around with Gunner behind his pack’s back, the guilt finally gets to Timothy. He has to break off their intense relationship and tell his pack about the rival wolves, but Christian has other ideas. Will Timothy confess to his pack or fall prey to Christian’s dominant desires?

After sneaking around with a pair of hot rival wolves for weeks, Timothy’s pack finds out about his secrets and his loyalty is called into question. But the little omega can’t choose between his Eurasian lovers and his pack. Then the sexy wolves catch Timothy alone and offer to claim him as a mate- both their mates. Will the omega give in to temptation or will the Eurasian wolves chain the little wolf up and force him to submit?

Timothy, an omega werewolf, found his life mates- two gorgeous Eurasian wolves. However, before his lovers can join his pack they must pass two tests: evade capture while being hunted and claim Timothy in front of his fellow pack mates. What will Timothy’s pack do when his sexy mates dominate the little omega right before their eyes?