Danny's Saga Complete is now available for sale. Check it out! 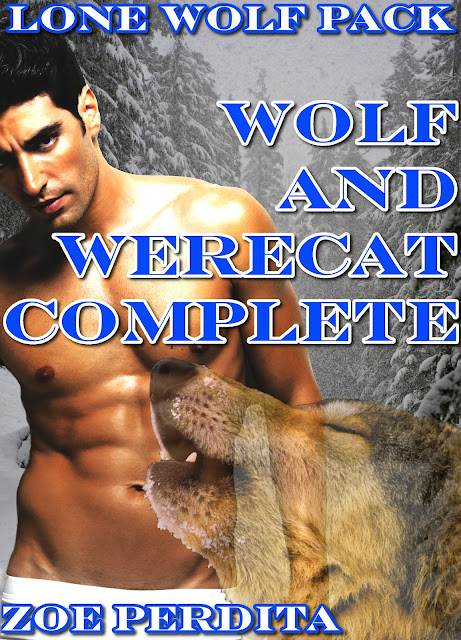 When Danny, a werewolf, finds a wounded werecat near a crime scene he’s immediately attracted to the feline stranger. Fur flies as both men butt heads- but an overwhelming passion brings them together. Could this be the mate Danny’s searched for? And can he protect his new love from the dangerous hunter who stalks him?

Wolf in Heat
Wolf in Lust
Mate for the Wolf

The werecat hissed as Danny dabbed the wound, cleaning it off with a cotton ball before he bound and taped it. The wolf’s hair was mussed, his tan flesh smooth and chiseled like some living statue. The memory of the deputy’s hand on Nalin’s cock sent a surge of anticipation through the snow leopards body. Would they touch like that again? One last time wouldn’t hurt.

“What now?” the werecat asked and touched the wolf’s bent head. Danny’s hair fell through Nalin’s fingers like silk.

The deputy looked up at him like a startled pup, his eyes wide, his lips parted and oh-so inviting. “Sleep,” the wolf said in a husky voice.

“Disappointing. I thought you were a man of action- or are you just a whelp after all?”
A deep growl resonated from the wolf’s chest, and he narrowed his eyes at the werecat. The bulge in the man’s pants tightened, and Nalin smiled. Another perfect reaction.

Leaning back on the counter, Nalin shrugged. “I doubt you can repeat your performance from this afternoon.”

Waves of lust and fury radiated from the whelp, his eyes burning as they stared at each other. “I can top it,” Danny barked.

Nalin smirked. “I don’t think you can, wolf,” he said slowly, enunciating each word carefully. How would the man respond to that?

Danny lunged at Nalin, slamming the werecat’s body into the mirror so hard the glass nearly cracked. The flame of the wolf’s lips attacked, hot kisses ripe with furious hunger pressing into Nalin’s own plump mouth. The taste of meat, the scent of musk and blood, and the burning touch of the wolf’s powerful hands seeped into the werecat’s starved body.

Sharp fangs nipped at Nalin’s golden neck, and he gripped Danny’s biceps. The muscles tensed under the werecat’s touch- the wolf’s throbbing cock rubbing against Nalin’s own.