New Release: Sin for Me

Hooray, my latest re-write is out on all sites now. It's on sale for 99 cents for the next few days!

Here's the cover and blurb. Check it out if you enjoy sexy gay monks. Yeah, I sorta got this idea from Tropic Thunder -- I wish that movie was real! I'd watch the hell out of it. 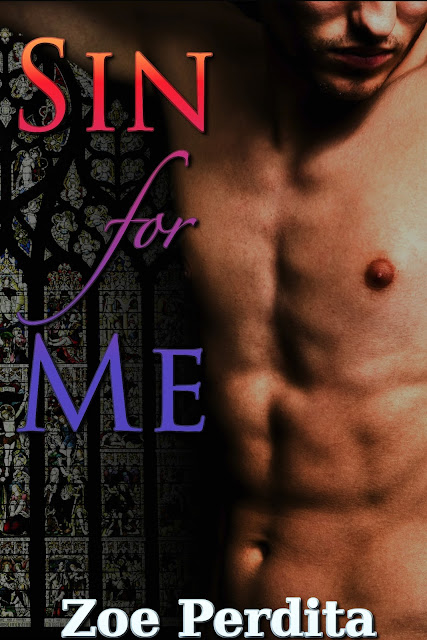 Brother Pío’s spent his entire life in a secluded Spanish monastery where he hides a fearful secret. Not only is he attracted to men, he also finds pleasure in pain. Instead of offering a path to sanctity, the thongs of his whip drive him into a flurry of lustful thoughts and desires.

Novella length. Revised and previously published as Brothers in Sin.

Opening the door to his room, Pío looked in the chamber. Sunlight fell through the window on the south wall and across the stone floor. Only two beds and two dressers stood in the room, along with the private bathroom for the tub and chamber pot.

Not since he was a novice had Pío shared a room with another monk. While he knew the room didn’t belong to him in any sense, it still felt like a violation to have another person there.

Brother Matthew bent over his dresser with a leather bag on the floor next to his feet. He looked up when Pío stepped in, smiling.

His face was clear and pale, a slight powdering of golden brown freckles across his nose and cheeks. Long lashes surrounded his deep green eyes, and a full, pretty mouth punctuated his straight nose. Auburn hair fell over his temples as he stood, offering Pío his hand.

Not old or ugly in the least.

“You must be Brother Pío. The Abbot told me you’d show me around.” His Spanish accent was strange.

The man’s reddish hair and pale skin were unlike anything Pío had ever seen. While his face was as youthful as Pío’s own, Matthew stood almost a head taller. Every man Pío’d ever laid eyes on in his whole life looked similar to him. Dark golden skin, dark eyes and brown hair in varying shades.

Did all men from England appear so striking and command such a presence?

Matthew’s strong hand gripped Pío’s, and his eyes fell to the marks the rosary string left. The taller man ran his thumb over one of them lightly, and Pío fought the desire to pull his hand away. The other monk’s touch was delicate, but there was firmness to it  -- a determination in his eyes that made Pío’s head light and his groin hot.

“I’ll be ready in a moment,” Matthew said and let his fingers trail off Pío’s, making the hairs rise on the smaller monk’s neck.

Standing back, he watched Matthew remove a scourge from his bag and place it neatly in the drawer. Pío took a deep breath as he stared at the worn black leather.

The familiar smell of sweat and blood filled his nose -- the snap of the thong on his back. The satisfaction of pain coursing through his veins, rushing to his engorged member, begging for more -- for release. The one thing he knew he shouldn’t revel in – yet his body betrayed him with every slap of the little whip.

Slowly, Matthew slid the drawer closed and the wood made a loud scraping sound, waking Pío from his fantasy.

Pío nodded, picking at the unraveling hem of his robes. His cheeks burned, even in the coolness of the room. “Oh, yes. Good.”

“Are you certain you feel well?” Matthew asked and raised a large hand to Pío’s forehead. “You look feverish.”

It was warm and dry and something about his touch invited Pío into it. But that was wrong! He shouldn’t give in to his desires – especially not in front of a fellow monk. Fire and brimstone for eternity were worse than earthly pleasures for a few fleeting moments, weren’t they?