Bad boys, dragons and nipple piercings! That's how I've spent my last three weeks, how about you?

Uh, so all of those things belong in the new book -- not that any of them happened to me in *real* life. I know. I'm disappointed too. At least Rory and Jin are sexy together. Come on, a dragon and a fire mage. It totally works!

I'm almost done writing Dragon & Flame (Haven City Series #6), and the cover is all pretty and ready for you to drool over.

Seriously, you may need a napkin because this is hot! The book should be ready for release in one month: September 29, 2014! 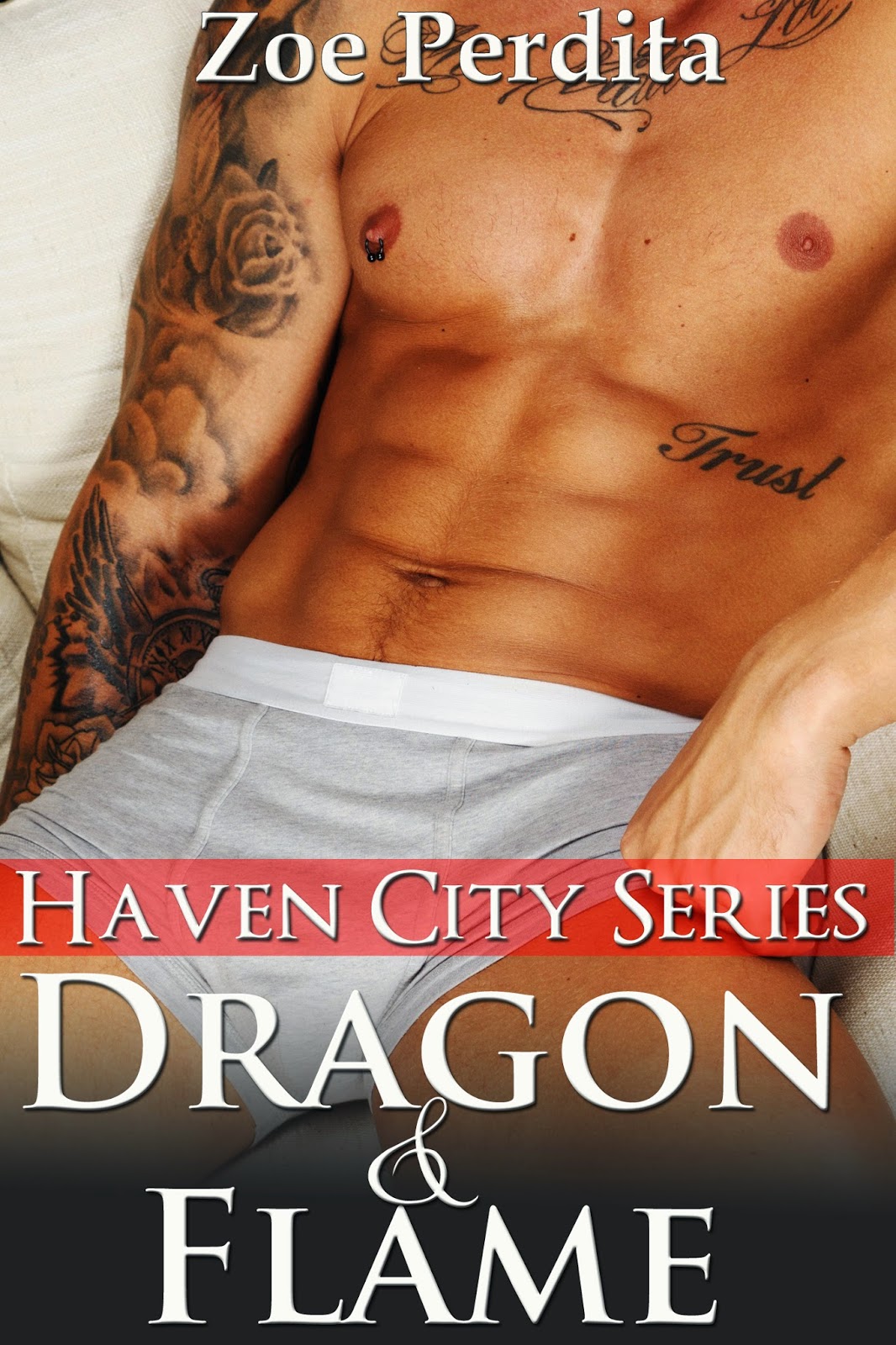 Continuing with the hotness, check out this little snippet of the first time Jin and Rory meet. It's unedited, so be warned.

“Cognac,” a deep voice asked and startled Rory from his stupor.

“Right away, sir,” Rory said and glanced at the man who ordered the drink.

He was taller than Rory by an inch or two and broader in the shoulders. He looked Asian. Strong jaw, sharp cheekbones and deliciously dark eyes locked onto his. The man’s black hair brushed his temples.

Rory swallowed involuntarily and pulled out the bottle.

The man watched him pour the drink and a flash of his pink tongue darted over his lips. “Enjoying the party?”

The man fingered the rim of the glass before he took a sip. “You look bored.”

Shit. Was he some important asshole who was gonna tattle on Rory for not kissing ass? He forced a stupid smile, but it faded into a smirk. What the fuck did he care? “Do I? Well, this party, as you put it, sucks.”

The man laughed. It rumbled from his chest, deep and charged with energy. “So it does. Not really you’re speed? What would you prefer?”

Was this guy for real? Rory shrugged and rinsed a glass, just to do something with his hands. “Better music for one. If you want jazz, then play actual jazz. Dancing wouldn’t hurt. Maybe a stripper. I’m not sure this is the right crowd for that kind of thing.”

The man sipped his drink, lips just kissing the glass. “What kind of stripper?”

“Like man or woman? Man. Someone with a big dick and loose morals,” Rory said before his brain could stop his mouth. He shouldn’t be talking to a customer like this. Fuck, and he couldn’t bring himself to stop. It was almost flirting and, well, it was better than nothing.

“Two of my favorite things,” the man said and lifted his glass.