Manuscript Tuesday: Alpha's Gamble - Ken Gets What He Wants

I'm sucking at posting for MS Monday. How do I keep forgetting? Because I'm lame, probably. But I'm here now with a new snippet from Alpha's Gamble!

I realized I was writing the wrong book last week. I'll explain more later. But the next Lost Wolves book won't be Kamil's story. It's going to be about Lucien and his mate. Stuff has to happen before I get to Kamil's book. Wish I figured that out sooner, but I'm dumb sometimes. *cries in corner*

Also, because I know how much everyone loves Destiel. . . . 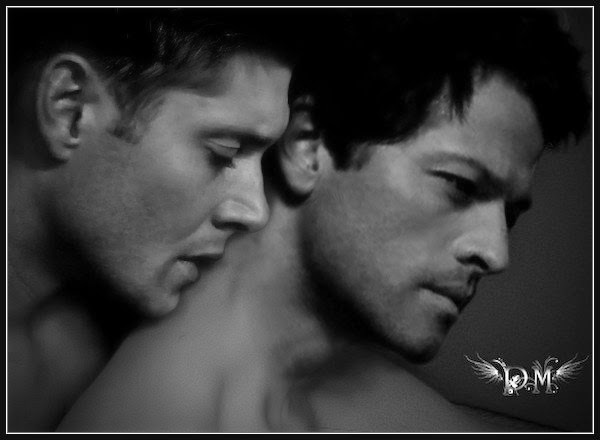 Finally, here's another peek at Alpha's Gamble (Haven City Series #7). Davis and Ken are having a serious conversation about old times and feelings -- then sexiness happens. ^_^

Davis blinked. “You looked through my bag?” He didn’t sound angry. More surprised. Amused.
Fuck. That shouldn’t amuse him. But this was Davis.
Ken’s cheeks heated. “I wasn’t trying to snoop, but I checked to see if you left anything important to make sure you didn’t skip town,” Ken said. Admitting it felt like scraping razors over his tongue. It’s exactly how trusting Davis felt.
The flash of laughter died in Davis’s eyes. He nodded. “Yeah. Makes sense. But I wouldn’t leave without a word. Not this time.”
“That’s not what I asked,” Ken said and held as still as he could. Every time Davis talked his body rumbled. Vibrated against Ken. “Why that picture?”
“Because I always missed you the most, and that picture reminded me of the good times we had. Before things got out of hand. Don’t tell Ty. He hates me enough as it is.”
How could he just admit that without an ounce of hesitation?
Ken took a sharp breath and nodded. He didn’t know what to say. How to respond to one of the most romantic things someone had ever said to him – and it was Davis who said it.
“So?” Davis said. His grip on Ken’s fists relented and moved to Ken’s wrists. “Anything else you want to know? While we’re confessing things, do you want to know about the time I found your porn?”
Ken’s cheeks flushed, and he shook his head. “This is a bad idea, Davis. You—”
The pink tip of Davis’s tongue darted over his not so full lips. “I what? I’m not gay enough for you?”
“Not really,” Ken said and bit back the desire to laugh. What else could he do? “But that never stopped me before.”
“It really didn’t,” Davis said and his lips turned up, just enough, that Ken’s stomach twisted into a knot. “I want to know what it’s like.”
“What?” Ken breathed. His heart hammered, and Davis’s pounded with it like a pair of warring drum beats.
“What kissing you is like.”
Ken was sure his ass fell asleep from the sharp edge of the counter pressing into it. And the wall of Davis’s chest was as immovable as a mountain. His breath hitched in his throat, and against every ounce of better judgment, he looked into those brown eyes.
Nodded.
His heart called the shots now. His cock came in as a close second.
Davis didn’t do what Ken thought. He didn’t smirk and use too much tongue. He carefully brushed a damp strand of black hair from Ken’s forehead and leaned down right as Ken leaned up. For all the times he’d kissed some other guy, he never felt as close to unraveling as he did then. This wasn’t just anybody.
It was Davis.
Davis sober and asking to kiss him because. . . he didn’t even want to think about the reasons or the consequences.
This. Was. Happening.
His mouth met Ken’s softly, though Davis’s lips weren’t what Ken would call soft. The stubble on his cheeks tickled Ken’s chin. A surge shot through him when Davis’s tongue brushed his. Just what he was afraid of.
Fireworks went off behind his eyes, which he’d closed at some point.
Ken thought Davis’s mouth might be harder to move with. But it was far too pliable. Too eager as it worked against Ken’s.
Ken’s fingers gripped the side of the counter, and he tried to bite back the groan building in his throat, but he couldn’t keep it down. It rose with Davis’s hands, which released Ken’s wrists and wound over his arms.
Shoulders.
Rested on the back of Ken’s neck and pushed through his hair.
“That sound gets me off,” Davis grunted. “Do it again.”
He sure as hell wasn’t kidding. Davis’s cock stiffened, Ken felt it against his hip. No matter what he told his mind, it didn’t want to listen. How could logic matter at a moment like that?
So he put his hands on Davis’s hips. The flesh was hot and hard. A tremble traveled through Davis’s body at the touch.
“What?” Ken asked.
“Make that noise,” Davis breathed into his mouth. Their noses bumped as the alpha turned his head. Blinked.
Ken never realized Davis’s lashes were so long and full. They framed his eyes with dark wisps. Women were probably jealous of that.
Women. Because Davis wasn’t gay. This was just. . . just. . . . just what?