Omega Enslaved (Lost Wolves Book Four) is almost finished being revised/edited. I'll have it ready for pre-order on Wednesday or Thursday of this week.

Also, I re-read Saezuru Tori wa Habatakanai (Twittering Birds Never Fly) this last week. It's one of my all time favorite manga. I should do an entire post on it (and other manga/BL comics that I love). Anyway, let's take a moment and appreciate how amazing it is. And cry because we're not Yoneda Kou. 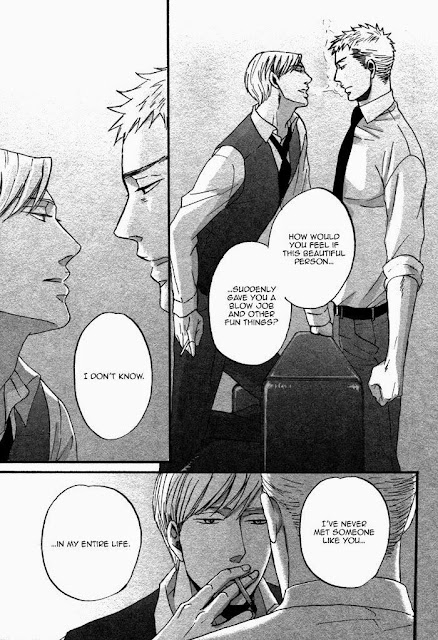 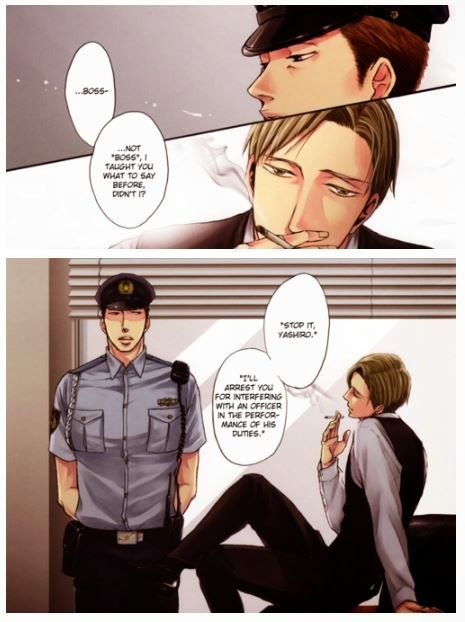 Doumeki/Yoshino is love. That is all.

Oh, and here's another peek at Omega Enslaved (Lost Wolves Book Four). Felix is having bad dreams. Lucien warned him about this -- sexy times ensue. Enjoy!

Lucien stood next to the door, his arms crossed and his red eyes, just like those in the dream, fixed on Felix. His mouth dipped downward, and his hair was mussed and limp. His eyes were smudged with dark circles and lines pinched the edges of his mouth. “I warned you,” he said and his voice was as hard as stone.

Felix yawned. “Warned me about what?”

Lucien sighed. “Your decision. This is what comes of it.”

“Cryptic mystical one doesn’t suit you,” Felix said and hopped down from the upper bunk. “And so sorry I didn’t want to lose my foot. Are the nightmares my punishment? I thought they were due to the fact I met you, my darling mate.” He put as much bite into the words as he could that early in the morning and fought another yawn.

Why did everything feel like some complicated dance with Lucien? For every inch of progress, they took giant leaps backwards. Not that it mattered once Interpol got their way.

“Perhaps it’s part of my punishment too,” Lucien said. His accent was slightly thicker than usual. It hung on the consonants, and Felix wondered how much his own carefully controlled voice slipped in moments of tiredness. As Lucien’s gaze dipped to Felix’s mouth, a surge of desire churned through him. “I didn’t want this either.”

“So you keep reminding me, yet you’re the one who gets turned on in my mere presence,” Felix said. His body moved without his consent. It edged closer to Lucien, so close they were almost touching.

The heat of Lucien’s body warmed Felix—urged him to bridge that gap between them. Why the hell was he doing this? Tempting fate by riling up an unstable alpha? Even with that thought in the forefront of his brain he didn’t stop. Felix pushed because he told himself a long time ago that he’d never get trampled by another person, human or shifter, again.

Lucien took a sharp breath. His tapered fingers grabbed Felix’s chin in a delicate but firm hold. The pad of his thumb brushed Felix’s lips, and that damn touch sent a shock to his groin. “I didn’t want it, but I accept our fate. There’s nothing more I can do. However, I don’t want to be inside your head any more than you want to be inside mine. But now. . . .”

Inside his head? Did that mean Lucien could see the lie? Did he knew who Felix was and why he was there? Shit!

Felix moved forward. It was the only way to keep the alpha’s mind off that dangerous line of thought.

Their lips met in a kiss that was anything but gentle. It burned his lips, and Felix told himself it was the sleep and those dreams that made him melt with it. He pressed himself into Lucien’s arms – arms that wrapped around his back and as close to that hot, needy mouth as possible. Felix’s fingers snagged on the front of Lucien’s shirt and pulled him close.

The thrill of those lips was the one thing that chased away the sensation hanging over him for his terrible night of sleep. Nothing more than a temporary escape, but it was better than dwelling on it. If felt as if the lack of contact they’d had in the last few days overflowed into this moment.

But Felix didn’t care about Lucien, did he?

The lust was Lucien’s fault not his. Felix gave in and went along with it until the alpha was out of his hair. Might as well get something out of their time together. This wasn’t a bad prize considering it got him off.

Sex with Lucien was better than sex with anyone else he’d been with so far. Not that he’d tell the alpha that. It might give Lucien the wrong idea.

His mouth trailed over the rough edge of Lucien’s cheek – the stubble prickled his lips – and he sucked and licked and bit at the skin of Lucien’s neck until the alpha growled.
Felix pinched his eyes shut, and glided down Lucien’s body with his lips and hands.
Then Lucien gasped at a particularly hard bite. “Felix. Stop.”

Felix didn’t want to stop, but he wasn’t going to turn into one of the men he despised. So he eased back and looked at Lucien’s face.

The alpha stared at him, his eyes wide and startled. Unfocused. He blinked several times and let out a long breath.

“Too rough?” Felix asked and tongued one of the marks on Lucien’s neck. The skin was musky and tinged with salt. The scent intoxicated him. Wound him up. What part of not being gay didn’t his body understand?

A shiver shot through Lucien’s groin and settled in Felix’s.

Lucien’s fingers dug into Felix’s shoulders, but he didn’t push the omega away. “If you keep doing that—”

“What? You’ll fuck me?” Felix asked, cutting him off.

Lucien’s touch, hard and grasping, slipped over Felix’s back and grabbed his ass. “No,” he snarled. “I’ll claim you, and I’ll never let you go. I’ll chain you to my side like a dog. How would you like that?”

Something other than heat should’ve flooded Felix’s balls at those words. It was a threat, one he’d heard before. Well, not exactly the same but close enough to sting. To chill him. But it didn’t, and he wasn’t sure why.

“Try it. I’m not so easily kept,” Felix said and smirked.