I was going to post this on Monday, but I got waylaid with revisions. Therefore, it's a little late, but at least it's here! Also, hooray for marriage equality throughout the US!!! ^_^

And I found this: 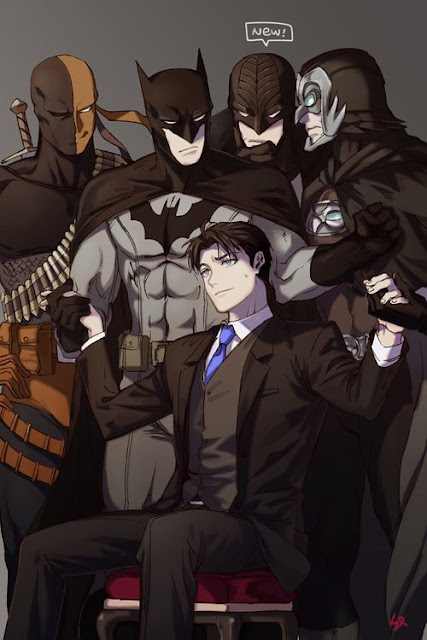 Dick brings all the boys to the yard. Hehe. Can you blame them? I sort of do ship Dick/Slade, but not Dick/Bruce. Too many 'daddy' issues with the latter for me.

Here's the first chapter of Titan in Chains! In order to get a look at the second chapter, you can join my mailing list here. Enjoy!

The brownstone was quiet when Calder got home, and his brain buzzed from his run-in with Patrick Black and the fact that he was Calder’s roommate – what kind of crazy world let that happen? He retreated past the front section of the house and into the back rooms – the secret rooms that only the members of the VS knew about.
It stood for Victory Squad.
The name needed some work, but Calder wasn’t going to bring that up. If he made a snide comment Adele might change her mind about letting him join, and no way was he going to be cut out of his own mother’s pet project any longer.
It’s the only reason he applied to Vale and pushed to move to Darkvale. The only reason he had to slum it in a city beset with crime – a city that needed him more than a relatively calm place like Metro ever could.
Because Calder might be a freak, but at least he could put his weird abilities to better use than throwing a ball and running down a field in a mock battle. His nerves bristled with restless energy, and he shed his shirt and shoes as he stepped into the large underground training room. He didn’t bother with the punching bags – one hit and they’d burst. He moved on to the titanium wall right away.
Jordan always said Calder needed to pace himself, but what the hell did he know? Jordan had some enhanced strength, but his biggest talent was shifting into animals. They called him Dire because his form of choice was the long extinct dire wolf – a huge pre-historic beast that dwarfed modern wolves.
Not even Adele was like Calder. She was a regular human. She couldn’t dent pure titanium with one punch.
Calder could.
His fist met the grey metal and a satisfying ring vibrated through his bones. His gut clenched and his heart raced. Each impact with the wall let him focus on something else besides the look in Patrick Black’s eyes.
Or the way he moved like a cat.
Or the fact that he was supposed to be Calder’s sworn enemy.
And Calder liked him in a ‘hey, let’s be friends/roommates’ kind of way. And now that he knew who Patrick really was, it actually made it better. He finally met someone who knew what it was like to be thrust into the spotlight because of your mom (or guardian) and how boring galas were, even if they raised money for good causes.
The best part? He couldn’t judge Calder for being a King.
“Hey, Cal. You in the gym?” Jordan asked over the intercom.
Calder stopped mid-punch and looked at his hands. They were mildly bruised, and he’d dislocated a few knuckles, but as he watched they knitted themselves together. The bruises faded from purple to yellow to nothing.
“Yeah. Is dinner ready?”
“Sure is, and Adele needs to talk to you.”
Calder wiped his brow and frowned.
He trudged out of the gym and up the stairs to the main floor. Past the perfectly designed parlor and living room, that no one actually lived in. Most of the paintings on the wall were priceless originals—Adele had a thing for the romantic period. His feet padded hollowly on the hardwood floor as he entered the informal dining room.
Adele sat at the head of the table with a glass of red wine in her hand. Dinner was set out, steak and potatoes. The cook had already retreated, and not even Jordan was there to take the pressure off. He probably decided to eat in the kitchen, the bastard.
Calder nodded and sat. His hair stuck to his head. Maybe he should’ve taken a shower before he came up, but the idea of keeping her waiting was worse than smelling himself.
“How was the meeting?” he asked and cut into his steak.
Adele smiled. They had the same coloring, olive skin and dark hair. Her eyes were liquid hazel, however, while Calder’s were gray-green. “It went better than expected.”
He let out a breath. “Great.”
“Did you get the housing sorted?” she asked around a sip of wine.
“Yeah. I did get stuck with a roommate, some computer science geek, but he’s low key. Shouldn’t be a problem,” Calder said carefully. His voice didn’t falter, though a slight twinge of guilt filled his gut for lying to her. It was for everyone’s wellbeing.
Adele nodded. At least she didn’t offer to call the damn school. “Good. Do you think you can handle college and the duties of a full-fledged member of the VS?”
Calder’s heart caught in his throat. He didn’t trust himself to speak or touch anything without breaking it. The knife in his hand bent, and he dropped it on the plate with a clang. “You mean it? Fulltime?”
“We need your skills, Calder, and so does Darkvale. Or should I call you by your new name: Titan?” Adele asked and a smile slipped over her red lips.
Calder couldn’t help but smile back.
Titan.
Yeah. That’s who he really was.
Labels: batman broken heroes series calder king chapter sneak peek dick grayson gay romance gay sci-fi romance gay superheroes patrick bishop titan in chains