Woo-hoo! It's finally out. Well, mostly. But I'm posting this anyway, and I'll update it when Barnes and Kobo get their acts together. *shakes fist*

Check it out here: 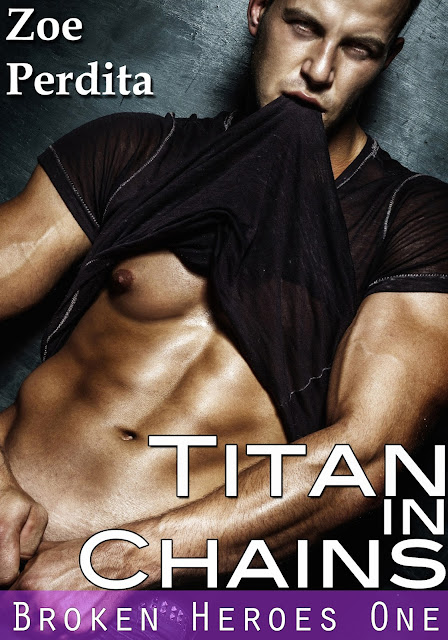 They call him Titan.

Calder King has it all: a football scholarship at a prestigious university, a guaranteed position as CEO of his family's company (someday) and all the hot co-eds he can handle, but Calder is way more interested in his missing memories and the weird things he can do -- like his super strength and invulnerability. Not to mention the crazy vigilantes terrorizing the city, the ones Calder alone (aka Titan) can handle.

Enter super genius Patrick Black. Not only is he Calder's new college roommate, he's also the ward of the man Calder's family despises. On the surface they should be enemies, but Patrick's the only person who understands what it's like to have the whole world expect stuff from you -- stuff Calder's not sure he can give. Never mind that Patrick is also openly gay and way too hot for his own good. Because Calder is straight, and Patrick doesn't date straight guys.

Patrick Black's whole persona is a carefully controlled lie. By day, he's a studious college student, and by night he's a vigilante exposing the city's dark underbelly as Apprentice. That doesn't mean he can't have a little fun once in a while. Calder King is fun and gorgeous, but he's also as straight as a damn ruler, which takes him off the table. When a mysterious stranger named Titan rescues Patrick one night, sparks fly. If Patrick can’t have Calder, maybe Apprentice can have Titan.

Lust and sex bring these two college roommates together but will their buried secrets tear them apart?

It was like having a devil whisper in his ear – a devil who knew exactly what he was thinking at that moment.

Apprentice’s suit left nothing to the imagination, despite the armor and the heavy boots. He was well toned and muscular for his height. His ass looked like a damn peach, and Titan’s groin clenched just looking at it. While he didn’t have the easy grin that made Patrick so warm, the edge to Apprentice’s smirk still set Titan’s blood on fire. Only this was a different type of fire. All lust and anger. And now a little bit of confusion mixed with it because what the fuck?

No way in hell should Apprentice turn Titan on.

Goose bumps trailed over his spine, but his skin felt as hot as a sauna. Or maybe it was all the rolling and jumping they’d been doing. In truth, the night was cold and the roof they sprawled on filthy.

Patrick would hate it.

That thought brought a lump to Titan’s throat. He licked his lips. “What the fuck are you talking about?” he growled.

“Go ahead. Tell me you’re not gay or whatever else you have to say. Get it over with so we can move past it.”

They needed to move past being this close. So close Titan felt the cup inside Apprentice’s Kevlar pants. It was hard and round, and his body responded to it in a way that was distinctly uncomfortable.

Being pressed against Apprentice like that should’ve raised danger signs inside his head. The part of his body that reacted was his cock – and that was worse than wanting to smash this asshole’s face in. Well, he would’ve have preferred if physical violence was the only emotion bubbling inside him. The mixture between that and lust was confusing as all hell!

“Don’t assume I’m some homophobic idiot. What do you think I need?” Titan asked. He wasn’t going to address the ‘not gay’ part because his body didn’t agree with him at the moment. He let it go. Patrick did something to his libido, and now Apprentice was doing it too. Calder didn’t feel badly about the former, but the latter – fuck!

Apprentice squirmed, and Titan tightened his hold. There were blades in those gauntlets. He knew it, and he took the risk when he grabbed them. He’d practiced with Dire over the last several weeks since Dire had the most first hand combat experience with Apprentice. Dire’d never won a fight because Apprentice was some martial arts master, and he always had a new weapon that messed up Dire’s game, in Dire’s own words.

Whenever Calder pinned Dire, his body didn’t tingle like this. Like electricity ran through his veins instead of blood. Shit. Electricity. He needed to look out for that. Apprentice had a taser, and his staff might have the ability to send jolts too.

How could he think of any of that stuff with Apprentice practically writhing under him though? And it’s not like he was actually trying to move. Nope. He just wiggled his body, pressing it against Titan’s until. . . until. . . .

His tongue darted out and swept over his lips. They were thin and the lightest shade of pink, but they looked like the tastiest thing in the world.

And those lips moved close. Brushed his jaw and sent another jolt of desire right to his balls. Not cool, all in all. Especially when the desire made him think of Patrick. And sex. And how badly he needed to turn Apprentice in to the authorities or smash his face. The former still held plenty of appeal – make him pay for what he’d done. Teach this little fucker a lesson.

“You need someone you can hurt. Admit it. Holding back all that power is killing you, isn’t it?” Apprentice purred in his ear. His breath was hot and the tip of that tongue slipped over Titan’s lobe and drew it into that fucking perfect mouth.

Titan growled. His hands tightened their grip, and he slammed Apprentice’s body into the roof. “Hurt? Why do you think I want to hurt anyone?”

“Because I’ve watched you. I know how badly you want to enact justice on those who deserve it. You think I deserve it, don’t you?” Apprentice asked and kissed him again.

Their mouths met, teeth bumping and his heart thudding. He shouldn’t have been kissing Apprentice like that or letting Apprentice kiss him. That tongue was like velvet in his mouth and those lips were rough and wild.

This creepy asshole was watching him? How much had he seen? What did he know? A knot of dread balled in his chest.

Titan yanked his head back and released one of Apprentice’s wrists. His hand clamped on Apprentice’s neck instead. He squeezed. “What did you see? Tell me!”

Apprentice gasped, and his free hand wound down Titan’s chest. His fingers found the bulge in Titan’s pants and cupped it. “You kissed some college kid at Vale U and said you didn’t want to hurt him. I think you really did.”

Titan pried his fingers from Apprentice’s neck. His mind spun with a million different things, and half of them involved tossing Apprentice off the roof and being done with it. The other half involved taking him up on his fucked up offer. Patrick’s face flashed in Titan’s mind once, and he shoved it aside. If he did fuck Apprentice, he had no reason to feel guilty. Patrick was trying to get him laid all the time.

Like Apprentice said, he deserved it. Unless it was some kind of trick. He was a sneaky asshole. “What the hell are you up to? Trying to discredit the VS?”

“No,” Apprentice said and sucked in a breath. His voice was scratchy and rough, and his chest heaved with effort. “I thought we could have some fun. The no strings attached kind.”

Dammit. Titan hadn’t meant to squeeze that hard. Any harder and he’d have crushed the windpipe or broken bone.

“Sex?” Titan asked and immediately regretted it. Of course it was sex.

“Unless you have a boyfriend or a girlfriend you don’t want to disappoint. Come on. We might have different values, but we’re the same in a lot of ways. Professional liars. This is who we are, and we can’t change it. Might as well enjoy what we’ve got.”

Somehow, Apprentice managed to unzip Titan’s pants with his free hand. The fingers brushed inside and freed his cock, half-hard, and teased the tip lightly.

Titan’s hips reacted, moved into that touch and the sensation that crawled over his skin with it. “I could kill you,” Titan said, his voice a low rumble.

“So don’t. You can be rough with me, and it won’t matter. Do to me what you’re afraid to do to others. I won’t tell anyone. Believe me, X doesn’t even know about this.”

Titan blinked. “I thought you and X were. . . never mind.” They shouldn’t be having a friendly conversation right now. He needed to either turn Apprentice in or give in to the request.

His body made up his mind.

This wasn’t a betrayal of the VS, it was a way to work out the churning anger that was going to get someone killed – someone innocent. Apprentice was as far from innocent as possible.