Bam! It's that time again. Time for the almost release of another Haven City book. The book comes out next Tuesday, September 1st!

And I'm fucking exhausted. I reworked this book so many times I want to crawl into a cave and sleep for a year. *cries in corner*

It's not that Tyler and Quinn were stubborn (like some people *ahem* Felix *ahem*), but the book was a lot different in my head than the finished project.

But it's finally done!!! And I'm gonna take a few days off to recuperate. Maybe read some yaoi. Play some video games. Read some books/fanfiction. Not drown in my tears.

Thankfully, I found this while looking for tattooed yaoi guys. 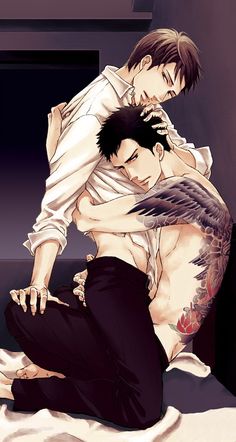 Thank you, Yoneda Kou. Thank you. She makes everything better.

Also this. I just sort of ship everyone together on Free! I mean, Reigisa is my Free! OTP, but then I also love the idea of Sougisa. Or Nasuke. And basically everyone fucking each other all the time. 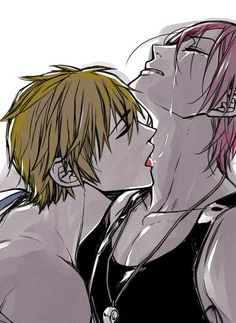 Finally, here's a peek at the first chapter of Alpha Enchanted. Quinn isn't crazy. Or is he? Or isn't he?!?! If you want to read the second chapter, you can join my mailing list here.