Big News: Broken Heroes is getting a BL/yaoi Webcomic!

I promised big news a while ago, and now it's time to announce it!

I'm working on a BL/yaoi/whatever you want to call it webcomic based on the Broken Heroes series.

Unlike a normal book which ties me down to two POVs (Calder and Patrick, in this case), a comic allows me to explore the world as a writer and give the readers a better idea of what's going on. Plus, you get to see the yummy Deacon, and what he's up to. And the other members of the VS.

Of course, this is a BL webcomic, and it's gonna be deliciously smutty.

Because I bring the smut. And it will be free smut, because you shouldn't have to pay extra for smut. That's my slogan. I may also run for president on the smut platform.

However, the webcomic is going to have a slight name change. It's called Vigilante instead of Broken Heroes, but the story is the same.

It will update once a week (at first) on Wednesday.

Since I can't draw, I hired an amazing artist. When the comic launches, I'm going to start a Patreon page (with some nice perks for supporters) in order to cover the costs of the artist and (possibly) con fees in the future.

Note: I'm not trying to make a living on this.

But I am trying to find new fans, so spread the word!!!

Also, I'm still going to write as many books as I can, but I love webcomics and I've always wanted to work on one. I hope you guys enjoy it as much as I do!

Now for some sneak peeks at the artwork.

Apprentice. His ass needs to get home. 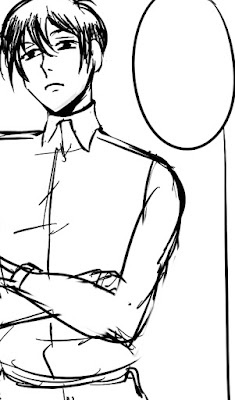 Rough sketch of Patrick. He's not gonna be bored for long. ^_^

Next week, I'll post some butt pics. Whose butt?!?! You'll have to tune in to find out!