Yay! Another Monday is here, and I'm actually posting this on time. Well, the book is with my beta readers and editor, and I'm still working out a few kinks on my own. Endings are hard, imo.

Especially when I sort of like the villain. I mean, he's a total asshole (and he's pretty terrible), but he's also interesting. Writer's dilemma. I want to write something from his POV, but I know he shouldn't get a happy ending. And he *might* be dead at the end of this book. Or not. I haven't decided yet. That's another dilemma altogether. . . . .

Oh, but I do have more from Haikyuu! I should focus on another ship sometime. Or another anime/manga, but for now we have more Noya/Asahi love. Because the cuteness overwhelms me. Also, Noya is amazing. I love him. 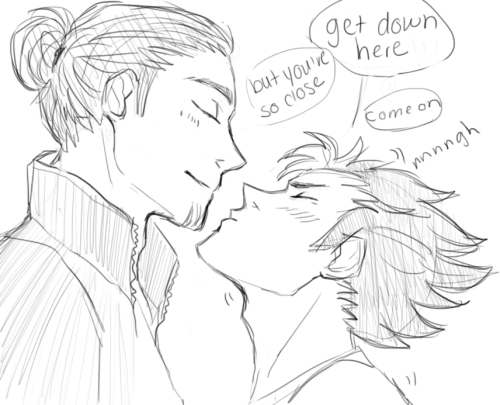 I feel like these pics sum up how their relationship progresses. ^_^

And now more from the next Lost Wolves book! This is sort of a long one, almost 2k! Abel and Dagz play pretend to rile up a group of hunters for reasons. Also, sexiness.