It's finally time for another MS Monday. Yay!

I'm ever so slowly heading south, where actual spring weather exists, and working on editing Trent while writing Titan Unleashed. My work never ends. Literally. I'll be writing stories as a zombie. They'll be about brains and probably hot gay zombie lovin'.

Also, have I ever mentioned how much I love Gravitation? The anime more so than the manga. So good! I think it was my first sip of the shonen ai Kool Aid. I mean, I'd been reading Gundam Wing slash for years, but then my friend lent me her copy of Gravitation (she thought I wouldn't like it!), and I fell in love. Give it a try if you haven't already. ^_^ 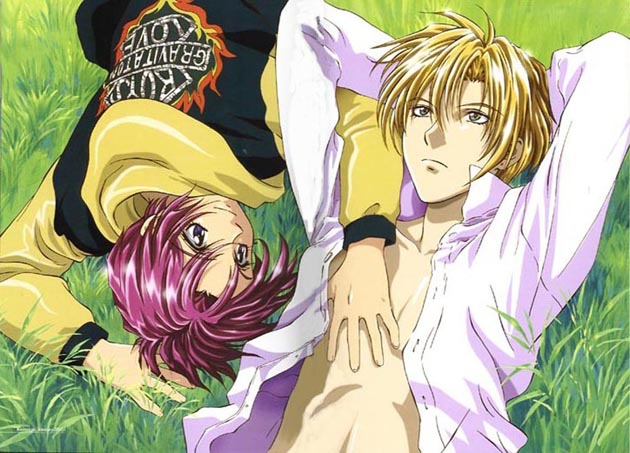 Here's a snippet from Trent. Cole and Akito are worried about their alpha and need to let off some steam.

Note: This is being edited and is bound to have typos.

Cole stared at him, the helplessness seeping over him like it had that night. The only thing they could do was run. An alpha usually didn’t sacrifice him or herself for a lesser wolf, but Trent did because he wasn’t like other alphas.
He’d proven that time and again.
“I do too. I can’t hold the pack together much longer. I’m not a leader,” Cole said carefully, the words coated his mouth like oil. Heavy and unpleasant.
Akito grabbed his hands and squeezed. “I don’t want him back because he’s our alpha. I want him back because he’s our mate. You’re doing fine. Nobody else knows what to do either.”
Cole snorted. Raj might know what to do, but Raj wasn’t there. “Trent would.”
Akito raised an eyebrow. “He didn’t always. He spent ages looking for the right beta. And after Minato his conquests slowed. You’re right. He was worried about everyone’s safety. The whole pack. He didn’t want any of us to end up dead.”
“He was most worried about you,” Cole said and pulled Akito against his chest. It was too sticky to hug like that. Too hot and oppressive, even with that fan blowing warm air across them, but letting go of Akito seemed like the most impossible thing in the world at that moment.
Akito’s fingers dug into Cole’s back, clinging to him. “I was worried about both of you. Love him more? Why would you think that?”
Cole shrugged. “You knew him longer.”
“I knew you first,” Akito countered and pressed his mouth into Cole’s shoulder.
Akito was shorter and slighter than Cole, being an omega, but he’d put on a layer of tight muscle since he’d been bitten and started training to fight with the best of them. His chest was still slender but defined, and his biceps tightened as he pulled Cole as close as he could get.
“You usually take his side,” Cole said, which sounded silly after it left his mouth.
Akito shook his head. “Do not. I take his side when he’s right. He wasn’t right about not changing me and you knew it. You took his side then.”
“I took your side, but not in front of the pack,” Cole said and sucked in Akito’s scent.
“We have something different, it’s not about more or less. We both know what’s it’s like in the cages. What it’s like to be human, and you won’t forget. You won’t let me forget, and Trent can’t ever know what if feels like.”
Cole’s jaw tensed, and he nodded. Trent was suffering out there, and they needed to think of a way to save him, yet he couldn’t pull himself out of Akito’s hold if he tried.
“We’ll get him back,” Cole said, for what had to be the thousandth time.
Akito nodded and leaned up. His mouth trembled as he pressed it into Cole’s, and the beta understood his hesitation. They hadn’t kissed much since they left Trent behind. Hadn’t touched more than brisk hugs and pats on the shoulder. Without their alpha, a piece of them was missing, and if they gave in to this, it felt like they were getting on without him. Giving up on him. When that wasn’t the case.
Not at all.
Cole wouldn’t do that until he was dead, and he knew Akito felt the same.
Still, his lips melted into Akito’s kiss, and his grip tightened on Akito’s hips, grinding into him. The brush of Akito’s tongue sent a rush of heat down his spine and rocketing to his cock.
His body, slick with sweat, focused on nothing else but the omega before him. How close they were to losing each other. Their big move against Boss Yagami could be the end for them all, and if that was the case, they both needed this.
Something to remember before that happened—remember why they were fighting so hard for this.
For each other.