My brain is editing fried. Which means I'm gonna take a little break on the weekend to recuperate before I burn out.

But the book is coming along. It's both kinkier and sweeter than the last Broken Heroes book, in different ways, so I hope you guys like it.

I was going to post more sexy superhero fan art, but then a new chapter of Twittering Birds Never Fly hit the web and I just have to share. I do buy the manga I read online, but I can't wait until the English book gets released for this one. It's way too much pressure. Please do support manga though! Especially the amazing Yoneda Kou! 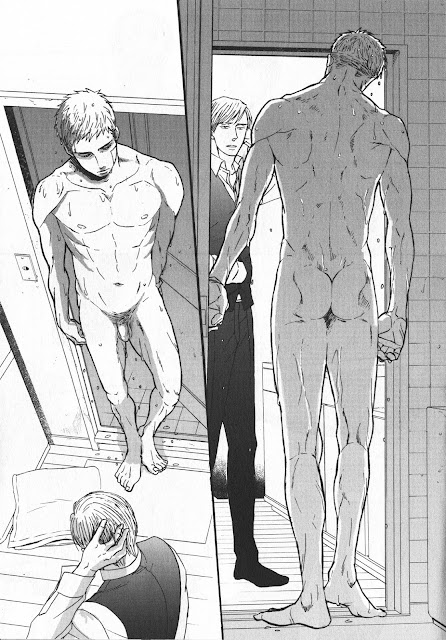 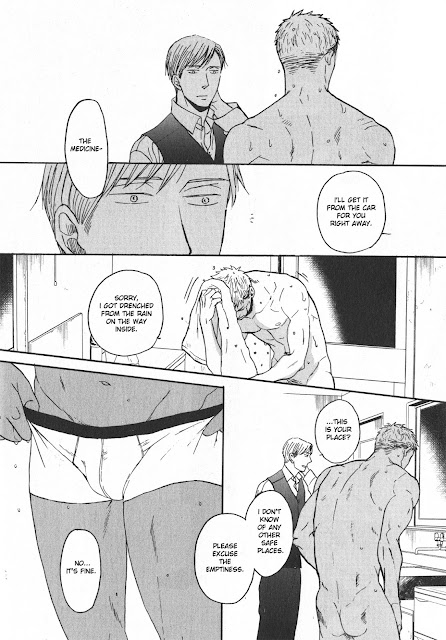 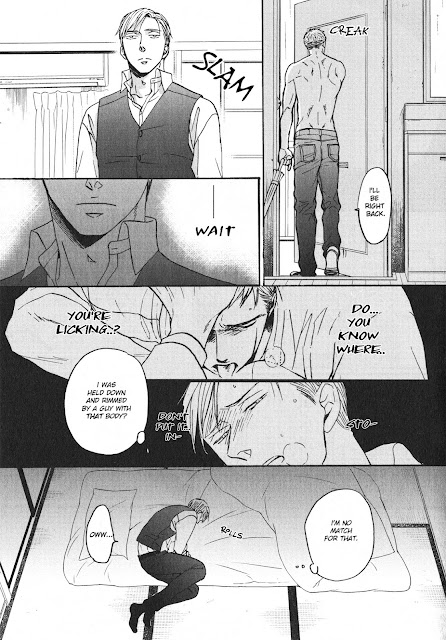 And now for more from Titan Unleashed (Broken Heroes Two). This is still being edited and is subject to change a bit. Enjoy!

“The cuffs?” Calder muttered and ran his fingers down Patrick’s arms.

“Yeah. You can take them off.”

Calder did, eyes flitting to the red marks on Patrick’s wrists and ankles. They stood out on his skin, pale and at odds with his black hair. They’d probably bruise too, from the look of it. He thought they’d be loose enough not to. Looks like he’d been wrong.

Calder kissed each one and wiped the dried come off Patrick’s stomach.

“You’re way too gentle sometimes. I’m not going to break,” Patrick said, an amused eyebrow raised, curved like the ears of a cat.

Calder squeezed the wipe, which smelled like lemon and antiseptic. “You always say that.”

But it wasn’t true. Patrick could break. Titan could break him. They both knew that, but Patrick trusted him not to. Probably more than Calder himself did half the time.

Patrick’s fingers brushed through Calder’s hair, tugging him closer by the back of the neck.
“You want to kiss me after—”

He could fuck Patrick five more times tonight—any night, just about—but Patrick was the one who couldn’t handle it. Not when he looked dead on his fucking feet.

Calder groaned, melting into the kiss, and grinned when Patrick pulled away. “Best of your life, huh? How many other guys have gone down on your ass? And the bj?”

Patrick snorted. “The bj was acceptable. I still think you need more practice. Maybe once a day.”

“Yeah, well, your blow jobs suck too. You should do me twice a day.”

“I suck and swallow. But I wouldn’t mind some extra practice in the least,” Patrick said around a smirk and stood up.

Right. Clothes. The dorm. They had to get back before they got caught breaking curfew again.

Adele would give him another lecture about being a responsible young adult if that happened. His gut twisted at that thought. She’d be home soon, and after he heard what she had to say, her lectures might not mean much anymore.

“So, were you playing around or did I really do a good job of surprising you?” Calder asked as Patrick frowned at his sliced up clothes.

“You had me fooled for about five seconds once or twice,” Patrick said, slipping those wire-framed glasses up his perfect nose. Behind the lenses, his bright blue eyes sparked. “The aftershave was a nice touch. But Dr. Layton? Really?”

Calder blinked. “What about Layton?”

Patrick crossed his arms. “You were wearing the same aftershave he does. And you didn’t do it on purpose, did you?”

It would sound stupid if he admitted that no, he hadn’t. But more to the point—“Why do you know Layton’s aftershave?”

“I noticed it the last time we stayed after to ask him about the lab, and you made fun of me for being hot for teacher because I said he was interesting,” Patrick said and pulled on his socks. Besides his coat, it was the only thing Calder hadn’t cut off of him.

“Oh. Right. But his aftershave? I just grabbed whatever from the drugstore on the way here to throw you off the trail. I didn’t want to make you think Layton kidnapped you. Is that why you were freaking out a couple of times,” Calder said as he put on his own clothes.

“Not Layton, but if I tell you the truth, you’ll freak out,” Patrick said with a shrug that didn’t make Calder feel better.

His stomach clenched into a tight little knot that forced a load of bile up his throat. “Wait. Did you think I was really gonna, you know, hurt you for real?”

Patrick’s cheeks, which had been flushed with color, blanched. “Not exactly. I thought, for a very short amount of time, that you might be X.”

“Deacon? When?” Calder said and stopped lacing up his boot. Patrick was still mostly naked, and Calder tossed Patrick his shirt.

Patrick sniffed it before he tugged it over his head, mussing his hair. “I said X, and it was right before you asked about taking the tape off. X wouldn’t do that, so I knew it was you for sure. It was stupid, I know.”

“But Deacon’s still on crutches. He pretended to kidnap you like that before? When you were a kid? Was that part of your rigorous training?” Calder didn’t mean to sound like that. Incredulous, Patrick would say. Arkley too. Those two should get together and have a thesaurus party or something.

Calder might not even remember his own childhood, but even he knew that was all kinds of fucked up.

Patrick shook his head. “Kidnapping, yes. Not the rest of it, pervert.”

“You’re the one who wanted your boyfriend to fake kidnap you,” Calder said and crossed his arms.
Patrick grinned. “You’re the one who got so into it you didn’t want me to actually escape or know who you were. Good job, by the way. But what am I supposed to do about pants? You bring extras?”

He had a point.

Calder shook his head. Rubbed a hand over his hair sheepishly. “I didn’t know I’d have to cut yours off for trying to escape. I improvised that part.”

“So I’m supposed to walk around with your giant T-shirt and my boxers?” Patrick asked.

“I only cut the band of the jeans. Hold them up with a belt and you’re coat will cover it, and we’ll call a cab. It’s late enough no one should be around campus.”

Patrick didn’t argue further about the jeans, though he did look wistful as he yanked them on. “They made my ass look like a dream, and you ruined them.”

“All pants make your ass look like a dream,” Calder said and threw him that charming grin that got him out of too many situations to count. He’d only used it on girls until he met Patrick.

“Where are we anyway?” Patrick asked as he fished for something to secure this pants. Calder didn’t have a belt on hand, but there was a short piece of rope on the ground he’d thought about using with the cuffs. Patrick raised an eyebrow when he picked it up and looped it around his waist, trim and muscular, like the rest of him.

“By the docks. King Inc. owns the whole lot for a shipping venture. Uh, I don’t think that’s secret info.”

“Probably not, but you brought me to one of your mother’s buildings for kinky sex play? You better hope no one saw us or Calder King will get a tawdry reputation.”

Calder shrugged. “Hey, no one was around, and there aren’t any cameras. Plus, don’t you already have one of those?”

“That’s Deacon. I’ve worked on keeping mine clean. Adele just thinks I’m guilty by association. And maybe she heard rumors from my high school,” Patrick said, like an afterthought, as he pulled on his coat.

Patrick’s only reply was a smirk. “Nothing true, if that’s what you’re worried about.”

“But you weren’t some simpering virgin before I met you. Must’ve done something to earn it,”
Calder said and waggled his eyebrows, though a weird knot bulged in his stomach, ugly and covered in sharp edges. The idea of Patrick screwing around with someone else. . . . Yeah, best not think about it or he might break something.

“I’m always simpering, but you’re right about the virgin part. Is this the best time to talk about that? I’m starving, and I have to get some sleep before Econ tomorrow.”

Changing the subject was one of Patrick’s super powers. Or it would be if he had super powers. And him blowing it off just made that sharp knot worse. Calder shoved it down and threw an arm over Patrick’s slim shoulders, easy to do since he was so much shorter.

“Fine. How did the interview with that lady go?”

Patrick stiffened for a second. “Not great, but it should get Deacon back in the spotlight so it served its purpose.”

Calder squeezed Patrick’s bicep. “Any luck on those files from the house?” He tried to make his voice sound light and not so strained. Not sure if he pulled it off though. It’d be nice to go to Adele with more than pictures.

“No hits. Well, there were a few for parties and things that involved Adele. But nothing incriminating. Nothing from Project Lazarus or the Asclepius Lab. She covered her tracks immaculately, and I wouldn’t expect anything less.”

Calder didn’t expect anything less either, even if it filled him with that same old nagging fire in his gut.

Patrick nuzzled his neck. “Midnight tacos sound good to you or is it just me? Señor Bueno is twenty-four hours.”

The journey to Darkvale from Metro did make Calder hungry. Plus, who could say no to tacos? He leaned down and pressed his mouth into Patrick’s head, sucking in the scent of his sweat and shampoo and that gel he used. “I knew there was a reason you were my boyfriend.”

As they walked away, Calder told himself he was being stupid for worrying about dumb shit like that. Patrick promised not to keep important information from him anymore, and he hadn’t so far.

Their relationship was build on trust.