Manuscript Monday: Making out with your ex is never a good idea, except when it is.

The book is done and in the final stages of editing! Wooh-hoo! It's up for pre-order on Amazon, if anyone is interested.

And that means it's time for Manuscript Mondays to commence. Double wooh-hoo! I'm not sure if I'm spelling wooh-hoo correctly. Oh well.

Also, I've been re-watching Natsume Yuujinchou, and that has to be one of the gayest non-yaoi or shonen ai shows out there, you know, besides all the newer sports anime. And I mean that in the best way imaginable.

Natsume, our lead, shows no romantic interest in any girl, and he only blushes around dudes. Especially Tanuma and Natori. I'm just saying. . . . 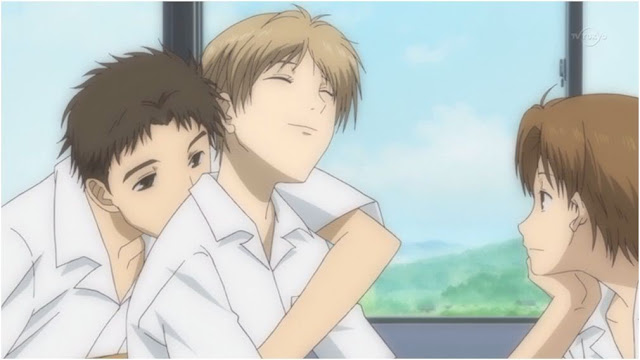 Actual scene in the show. 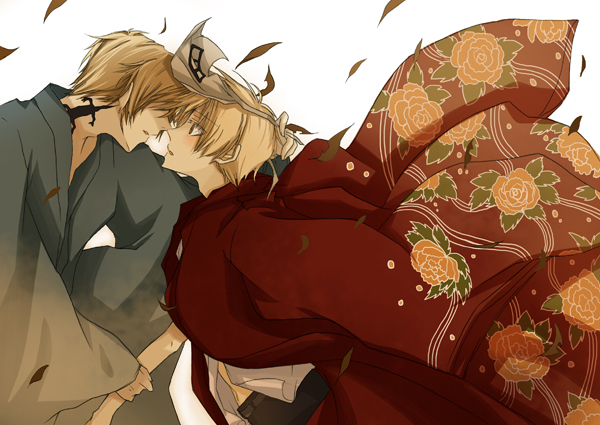 And now for the snippet! Ari should know better than to make out with his ex. He does, but his body doesn't listen. Oops.

Note: this is still being edited and is subject to typos and changes.

“Shouldn’t you get some sleep?” Cage asked.
Ari started and turned toward the backroom. The hallway was narrow in that part of the house. Those rooms had been used for servants in the past so they wouldn’t have to bother the polite company in the front of the house. The wallpaper had darkened with age, and was plain and less ornate than that in the formal sitting and dining rooms. It made it difficult to see with only the dim outline of light from the closed door behind the alpha.
“I have to kick you out before I can do that,” Ari said and moved toward Cage, swallowing the lump in his throat as he did. “You could’ve turned off the light in the room to make my life easier.”
Cage’s teeth glinted in the low light, and he did as Ari asked.
Perhaps that wasn’t the best idea, because now they were in near total darkness and Ari still had to lock the damn door to the backroom an alpha looming over him and showing off those sharp canines. He didn’t like to leave it open just in case a patient got sticky fingers while they were waiting to see him.
So he wasn’t the most trustworthy healer in Haven. At least he was alive and still had a decent business to show for it.
Cage didn’t bother moving as Ari leaned around him to lock the door, but his strong fingers did help Ari glide the key into the lock and turn it.
“You could’ve turned on a hall light,” Cage said, his breath brushing across Ari’s clean shaven cheek.
“Went out last week, and I haven’t fixed it yet,” Ari grumbled and took a measured step backwards, even when his body begged him to move closer instead. He didn’t mention that the other reason he hadn’t changed it had to do with the tall ceilings and how annoying it was to dig up the stepladder that allowed him to reach the hall light. Or that Kian seemed to like the shadows anyway, so why not have a few extra ones for him to hide in?
“And you aren’t going to bully me into it?” Cage asked, and Ari swore the damn alpha smiled at that.
“Like a healer could bully a fucking alpha. Are you going to leave or—”
“Ask me to stay the night,” Cage said, cutting him off and trapping Ari against the locked door.
Ari frowned. “Why the hell would I do that?”
Then Cage leaned closer, and Ari sucked in his scent, his presence, and couldn’t have forced himself to move if he tried. It’d been far too long since he’d been this close to anyone who wasn’t a patient (and that was never in a sexy way either since he was a professional). Casual dating wasn’t his thing—never had been—and after what happened with Cage and Kian, well, he’d all but given up.
Now this.
“I don’t forgive you,” Ari managed, like that might get Cage to take a step back. Give him some room to think and breathe and say ‘no.’
But the alpha didn’t, and the word never quite reached Ari’s lips.
“I know. I don’t need you to forgive me. . . . I need—” His mouth brushed Ari’s, and Ari bit back the sound that wanted to claw its way out of his throat, a desperate needy sound that had to be the fucking alcohol talking and not his actual thoughts.
Giving into the kiss was the worst idea he’d ever had, but his body melted into the touch like he was made of butter and Cage’s fingers were a sizzling skillet. They felt nearly as hot as one as they wrapped around his shoulders and held him close.
Ari’s teeth snagged at Cage’s bottom lip, sucked it into his mouth and the alpha groaned.
Shit.
Kian needed to help him end this.
Tip over another box.
Knock on the wall.
Something!
The house stayed quiet around them, however, and Ari’s chest heaved and his groin ached. Well, maybe this wasn’t so bad. He didn’t need it to mean anything. Not like he was taking Cage back. Getting his rocks off once in a while would do wonders for his mood, he guessed.
Not to mention his blood pressure.
“This doesn’t mean shit. I’m not taking you back. We’re not going upstairs, and you aren’t staying all night,” Ari grumbled and let his lips trail over Cage’s jaw.
It stiffened under the touch, and Cage’s heart beat beneath that plaid button up like he was running a marathon. To get that shirt off and—no! Not going that far.
“That sounds like a lot of rules. I hate rules,” Cage growled, and his palms trailed down Ari’s chest, toward the buttons of his slacks.
And, shit, Ari didn’t stop him.
His hips rocked forward.
His body fucking sang with every touch, and that devious part of his brain that he wished he could squash most of the time—the part that missed Cage’s presence—took over.
Let this happen.
Wanted this to happen.
At least, that’s what Ari told himself as his fingers snagged on Cage’s pants and undid the button, slid down the zipper. His mouth wandered over the alpha’s neck, kissing and sucking on the day old stubble and damn near licking him raw.
Had he always tasted like this or was he really that pent up?
Maybe it was just the booze.
Yeah.
Best to blame it on that.
Labels: alpha's cage ari gold book snippet felan cage gay paranormal romance gay shifter romance haven city series hot yaoi makeout manuscript monday