The Glorious Gayness of Yuri on Ice!!!

As you can tell from the title of this blog post it’s a little different than normal. It has nothing to do with my books, but I know a lot of you enjoy anime like I do, and that's what I want to talk about today.

It's about Yuri on Ice!!!, and I'm all kinds of obsessed with it for a variety of reasons. Plus, the show is pretty groundbreaking, and I'd like to talk about it. 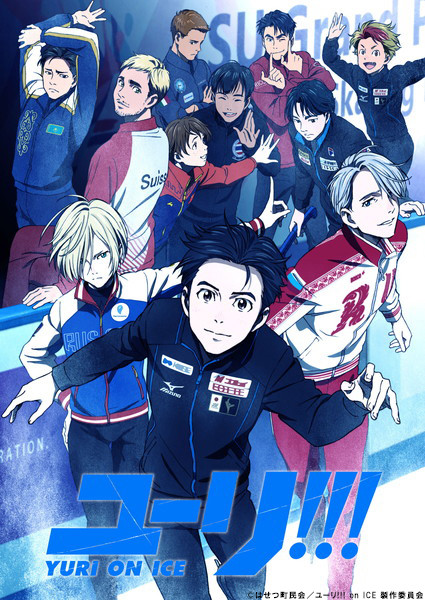 Sports anime is usually kind of gay. The male leads. The heightened emotions. The rivalries that seem almost romantic in nature. The utter dearth of female characters. Yeah, most shows have 1 or 2 ladies who are there to cheer on the team/protagonist in some way.

However, Free! Iwatobi Swim Club, and the sequel Eternal Summer, were the first (that I saw anyway) that took out the gay subtext and made it *almost* text. If you include the stories in the Free! character mooks as part of the series canon than the relationships do jump into the text in full force. However, the show never quite goes beyond hinting at relationships deeper than friendships. Even if we do get an entire episode of Nagisa basically flirting with Rei until he decides to join the swim team.

But Free! Iwatobi Swim Club broke new ground in that way because it was so popular, both in Japan and in the West. We all know a bunch of other sports anime with gay subtext followed. I'm not going to talk about those, but I think without Free! paving the way, we wouldn't have Yuri on Ice!!! 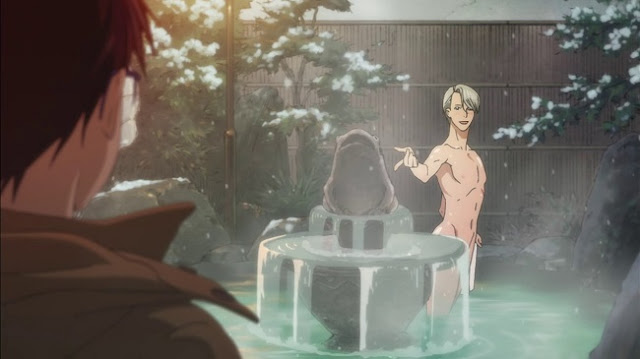 And that would be a damn shame.

First, let's talk about Viktor. He’s 28, and doesn't have any sort of romantic attachment at the beginning of the show, though he said to be a playboy. We know he has a lot of fans, mostly female, and he seems to soak up the attention – but we never see him flirt with a woman. In fact, the only person he gets super touchy-feely and flirty with is our hero, Yuuri.

“But what about in episode two when he talks about girlfriends?”

I can hear you asking that question even through the computer screen, and I have an answer. If you watch the show on Crunchyroll, then the translation is a little bit off. In the entire conversation about ‘girlfriends’ the Japanese word that Viktor uses is ‘koibito,’ which means ‘lover’ and not the word for ‘girlfriend,’ which is ‘kanojo.’ So, Viktor is asking Yuuri if he’s ever had a lover *not* a girlfriend. That is a very deliberate choice on the part of the anime creators.

I’m not sure if Viktor is meant to be gay or bi or pansexual, and since we’re only three episodes in we might learn more later. But for now I think it's safe to assume he's not straight. The queer is strong with this one. 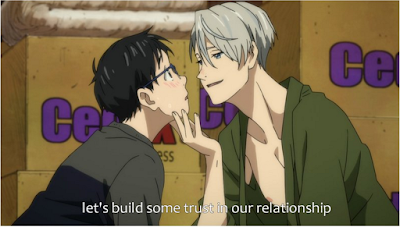 Next, let's talk about the OP. Most sports anime OPs have a pretty fast and hard (for Japan) rock song. Yuri on Ice!!! goes in a different direction. Seriously. Listen to the OP and tell me it doesn't sound like a wonderful gay anthem. Go ahead. I'll wait.

Sure, I guess it's subjective. The song could just be an ‘achieve your dreams’ kind of anthem, but no other sports anime theme is this gay. That's a fact.

Yuri on Ice!!! doesn't have a whole lot of female characters (yet), but those who are there are unavailable to our hero. His childhood friend is married with kids. And Yuuri claims he has no romantic interest in his ballet teacher. Considering he goes to her for help in seducing Viktor, I’m pretty sure that's true.

On too the third episode—the gayest of all so far. For one, we have Yuuri who spends the entire episode trying to figure out how to awake his sexual side. And the conclusion he comes to – Viktor. Seriously folks. Yuuri *knows* who he is dancing for, and it's not his love of pork cutlet bowls. 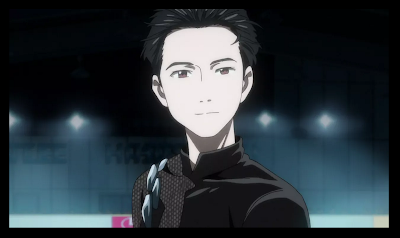 And, in order for him to get in touch with his sexual side he realizes he can't be the playboy, like Viktor. Instead, he gets in touch with his femininity in order to seduce the playboy (Viktor), and it works! On Tumblr there was some pushback about Yuuri choosing his feminine side over his masculine side in order to seduce Viktor, but I honestly don't see a problem with it. It's pretty revolutionary for a male character to decide consciously to be feminine and not be shunned for it. Yuuri can be whatever he wants to be, and that's what so beautiful about it.

There is also the conversation Yuuri has with Viktor before he takes to the ice in which he asks Viktor to watch *only* him. The ‘only’ was lost in translation, unfortunately. Yuuri also calls himself a pork cutlet bowl, to which Viktor replies that he loves pork cutlet bowls. Yes. Viktor loves Yuuri. You read it here first. Or maybe you read it on Tumblr first. I'm really not sure. 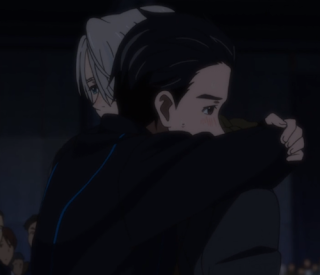 Finally, there's the scene at the very end when Yuuri is accepting his award, and when they ask what he wants to do next he doesn't answer until Viktor squeezes his arm and holds him, rather close. Like Viktor stated earlier in the same episode, if Yuuri lacks confidence, it's Viktor's job to give him some. 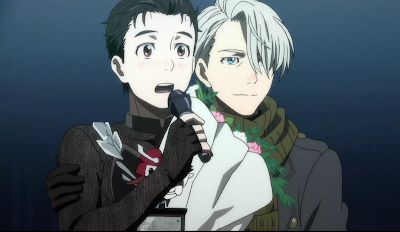 Oh, and finally (for real) let's not forget the ending OP and the little Instagram pictures that flash across the screen. The one with Viktor combing Yuuri’s hair is pretty damn intimate. Not to mention them in their swim trunks in those public showers scrubbing each other’s hair. 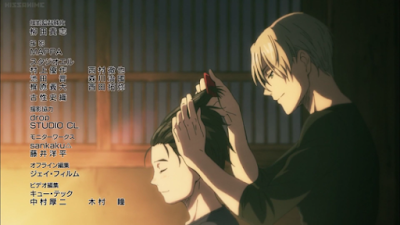 As of now, Yuuri/Viktor seems solidly canon, and that's amazing. Very few non-yaoi and non-shonen-ai anime have made main characters gay and treated it like it's no big deal. The only two anime that come to mind is No. 6  and Ouran High School Host Club (which are both awesome! Go watch them!).

I really hope Yuri on Ice!!! gets even gayer from here on out and keeps breaking new gay anime ground. ^_^