Manuscript Monday: A beta and a wolf without a rank

I need to do another Yuri!!! on Ice post, but until then, the show has gotten even better. It's like the sports anime gods blessed us with something so perfect I'm not sure what to do. It's beautiful in every way. *sigh*

And gay. Did I mention Yuri/Viktor is canon! My reaction to the kiss: ;lahdfhoekhanfdhkfnasd!!!!!

I don't even have to look up fanart for this show. The screen caps are perfect enough. 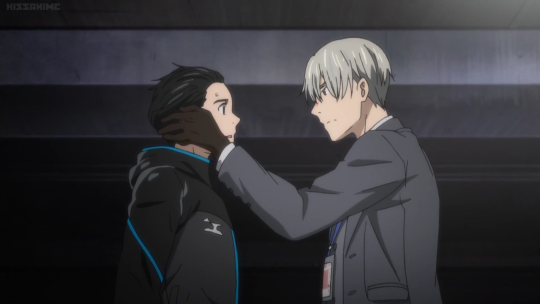 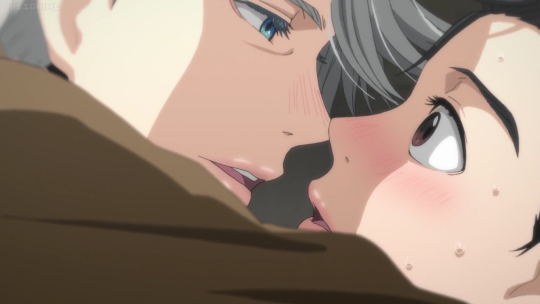 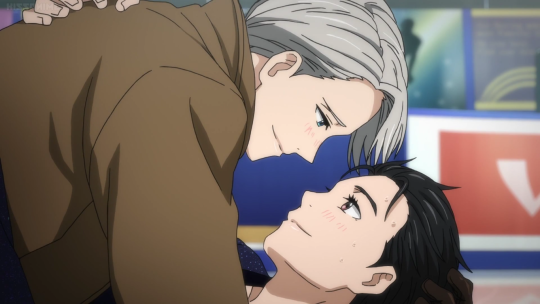 Anyway, more on that later.

Now it's time for a sneak peek at Kamil getting to know Aslan. Oh, and the book will be out after Christmas. Enjoy!

While Kamil washed and soaked with his fellow guards regularly, it was never this intimate. Still, he needed to do this for Maxim. Play the part—whatever his part was supposed to be. So Kamil stripped the dusty clothes from his body, kicked off his boots, and walked into the room.

He tried not to look at Aslan, who moved a cloth over his chiseled arms. He washed quickly, scrubbing his skin clean of a surprising amount of dirt.

Kamil joined him and did the same. He focused on the sensation of the rough cloth against his flesh and not the heart that throbbed next to his.

Yue’s mercy, what was happening here?

Kamil wasn’t looking for a mate, especially not one of Ashina’s Chosen who happened to drug him the first time they met. While Kamil had nothing against sex. He’d taken lovers on occasion in a fit of loneliness. Female lovers. Though he’d never been in love with any of them.

He’d never been in love with anyone.

When they were younger, Kamil watched from a distance as Maxim gawked at his slight omega servant for months. He knew how his alpha felt about Sasha, and the idea that a wolf would choose their mate over their own wellbeing (or the wellbeing or their pack) astounded him.

Love was a hindrance more than a help. He saw that first hand. Watched it destroy his dearest friend. But love also saved Maxim and Sasha in the end, and Kamil had a hand in reuniting them.

However, love and lust weren’t the same thing. Whatever else Kamil did, he wasn’t going to fall in love with this wolf. He might have to fall in bed with Aslan, for the sake of the mission, but that couldn’t be helped.

Kamil finished washing his body and poured the water over his hair. That would take more work, and he’d hardly gotten his body sudsy when Aslan brushed past him. The touch had to be on purpose because there was plenty of space in the bathroom for both of them to move. It’s not that Aslan touched him, it was just the slightest slip of his shoulder against Kamil’s side, but it stole his attention.

Aslan’s skin was slick and wet, and Kamil turned and watched the other wolf slink into the tub, his black hair plastered to his skin like a cloak. It was so long it brushed the top of his delicately curved ass.

Kamil’s blood felt close to boiling. He never thought he’d think of another man’s ass as delicate, but that’s the only word that jumped into his mind when he saw it.

His heart thumped faster, and he quickly finished with his hair. The water in the basin had cooled considerably, but the goose bumps on his skin kept any other thoughts at bay. Thoughts he shouldn’t have about a mysterious wolf.

A wolf he would undoubtedly be forced to betray at some point.

Kamil followed Aslan to the tub. The heat of it sunk into his skin, and Aslan gave him an appreciative nod. He dragged his hazel eyes over Kamil’s body, and Kamil knew how Maxim felt. He didn’t have as many scars as his alpha, but the beta had his share. A wolf didn’t become the Captain of the Guard without being wounded from time to time.

He lowered himself into the water as Aslan’s eyes leveled with Kamil’s cock. The prince raised an eyebrow, which was thick and black and curved like the ear of a cat.

"You're a soldier," Aslan said.

"Yes." It wasn’t a question, but Kamil felt compelled to answer it regardless.

Kamil wasn’t a good liar, not out right, so he pursed his lips and frowned. Let his frustration with the mission show more than anything else. "I do."

"I don’t need to know the details. They’d probably bore me, and you don’t seem like the talkative type, which I can appreciate. But I must know one thing," Aslan said. His fingers slid over the sides of the tub and flicked over the razors.

"What?" Kamil asked, unable to take his eyes from those hands. The fingers didn’t look like they belonged to a prince, unless it was a prince used to hard labor. They were brown and calloused.

"Do you come from Wallachia?"

The razor glinted in Aslan’s grasp, and Kamil wondered if the prince would slit his throat. Probably. That meant he couldn’t give the prince a reason.

He kept his expression neutral. Shook his head. It wasn’t a lie. Not really. "No. Moravia. It’s in Slovakia."

Maxim had no business with kingdoms so far to the south, so his name shouldn’t be known. Especially not in relation to King Lucien and Wallachia.

"I thought you were from the north," Aslan said. "You smell like it."

Kamil shrugged, because he wasn’t sure what a northern wolf smelled like or if that got him off the hook.

Aslan didn’t give him any hints either way, but he slipped closer, the water moving around his body and sloshing into Kamil’s chest.

Kamil didn’t want to think about scent at a time like this—nude and in a bath with another wolf. A wolf who happened to smell heavily of the orange tinted soap, heady musk and unknown spices. Not to mention the floral oil that clogged his nose. All scents Kamil was certain didn’t exist in his world before this moment.

"Why are you so far from home?" Aslan asked.

Another half truth would serve. Kamil took a breath through his mouth to clear his head. "I’m hunting a traitor."

Aslan’s bright eyes widened. "On behalf of your alpha?"

Kamil pinched his lips together. Would this prince welcome a wolf from another kingdom? Aslan seemed more pragmatic than Maxim in that way. "Yes."

"Who is this traitor?" Aslan asked and his fingers brushed over the sharpened edge of the razor he held.

"His name is Cosmos."

Aslan’s keen eyes narrowed. ”I’ll send out word of your quest. And that beard? Do wolves to the north sport them or is this just an unfortunate accident since you’ve been seeking your traitor?"

Kamil didn’t know how Aslan managed to be so close without their bodies touching. He tried not to think about that and brought a hand to the hair on his cheeks. It was rough and wiry, unlike the hair on his head, and he shrugged. "Some do. I didn’t have time to shave since I set off. And those hunters stole my supplies in Bulgaria and roused a village to attack me."

Aslan’s mouth twitched. "Hunters? No, those were bandits. You must’ve wandered into their village by mistake."

Kamil blinked. "Bandits? But they reeked of wolf’s bane and carried silver weapons."

"Well, they’re not stupid bandits. Of course they have to be prepared for shifter attacks, but they don’t hunt our kind. They rob and kill who they please. The land between Wallachia and our Empire has been ravaged by too much war and the human government didn’t know how to deal with it. They’ve left the people outside of the large human cities to suffer. It’s no wonder they resorted to banditry."

It reminded Kamil of the lands outside of Moravia, the ones left to the human warlords like the Butcher. They too gave little care to any life, human or otherwise, but it was power and greed that drove them not desperation.

"But you slaughtered them. Why do so if you understood their plight?"

Aslan let out a short burst of laughter. "And you aided me mightily, even in your injured state. Why did you slaughter them with me?"

It was a fair question.

"I thought they were hunters," Kamil said.

"And if you knew they were bandits would you have refrained?" Aslan breathed in Kamil’s ear. His chest slid against Kamil’s shoulder, hot and prickled with dark hair.

"No. They tried to kill me. Us," Kamil said and dared not move.

"Yes, and you’ve been trained to kill when you need to. You’re quite good at it. Proficient, I’ll bet."

It was true. Kamil officially took his first life when he, Maxim and Sasha assassinated Brano, the former Captain of the Guard. Kamil was a mere seventeen at the time, and that death set off several other deaths necessary for Maxim to eventually gain the throne.

Aslan nodded and opened one of the small jars. It was filled with a cream that he patted on his cheeks. "I too don’t often grow a beard but my predicament this last month made it difficult to shave. I’m sure you heard all about it from my bedroom."

Kamil licked his lips. No use lying about it when Aslan figured otherwise. "You were banished to the borderlands."

"Yes. It seems we have much in common. However, I’m going to shave myself first. Then I’ll shave you, Kam."

Kamil let the annoyance show on his face. No need to hide it when he already told this prince who could call him ‘Kam’ and who couldn’t.

He watched as Aslan moved to a small, circular mirror set against the wall. It was the only mirror in the bathroom, and Kamil hadn’t seen any in the bedroom. Perhaps Turkish wolves didn’t care what they looked like. Or they only had small hand mirrors. Glass tended to be difficult to make, especially in shifter territory, and it was much too expensive to transport from human territory.

Aslan scraped the razor over his skin, the sound of it sharp in the quiet bathroom. Even with a whole bustling city outside the palace’s walls, and a palace filled with countless shifters outside the window, the only sound Kamil focused on was his breath and Aslan’s razor.

He moved quickly and cleanly, removing the beard from his cheeks and neck in several minutes. He hadn’t nicked himself once.

Kamil braced himself against the back of the tub and waited.

Aslan splashed water on his cheeks to rinse away the hair, and revealed the smooth brown skin. His cheekbones were more pronounced than they’d seemed under the beard, and his lips were delicately bowed.