I know this is two days late. My bad. I meant to post it on Monday, and I forgot what day of the week it was. Again. I need one of those things that reminds me. . . .

Also, there's a lot of Dick Grayson bondage. I'm not complaining. At all.

On another note, Sync & Shadows (Darkvale Book Four) will be out in the middle of March. I'm currently reworking the end while I'm editing. I'm also releasing a bundle of all three Darkvale books and the Halloween short! 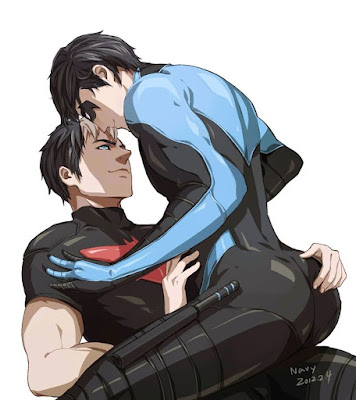 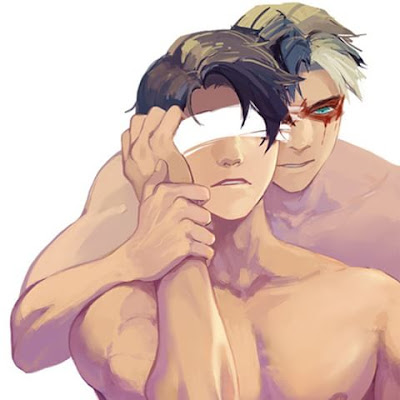 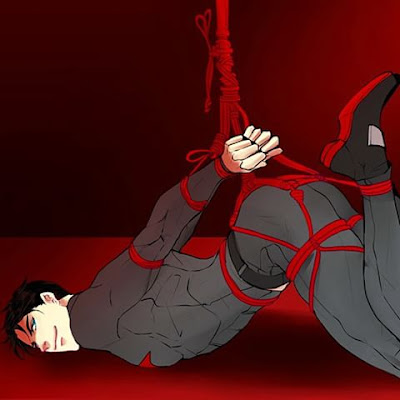 I think both Patrick and Hunter would like to be in that last position.

Here's the first snippet from Sync & Shadows! They're in a warehouse. Is is the same warehouse from Titan Unleashed? Maybe. . . . .

And since they'd handled everything important, a little celebration couldn't hurt.
Hunter only had one thing in mind.
He grabbed Spence, wrapped him in his arms and yanked him off his feet. Their lips melted together in a kiss that singed his soul.
Spence's mouth—hot and compliant—tangled with Hunter’s. His tongue dipped inside Hunter's mouth and wrestled for dominance.
Though, Hunter knew who always won that fight.
Giving in to Spence was like breathing.
Spence's fingers, still gloved, brushed through Hunter's curls. Snagged on the back of his neck and held him close. Their hearts thundered against each other, and Spence wrapped his legs around Hunter's hips and ground their are cocks together.
A few months ago, he wouldn't have had the strength to do that, and Hunter wouldn't have had the muscle to hold him up. The vigilante business was good for more than one thing.
“You look so fucking hot in that suit," Hunter growled and nipped at Spence's bottom lip. He pulled it between his teeth until Spence whimpered, and his fingers dug into the back of Hunter's neck.
Hunter's cock throbbed.
Curled.
An ache in his tight pants.
Spence's hungry mouth slipped over Hunter's strong jaw and down his neck. Sucking and biting and leaving all kinds of wonderful marks in its wake.
The marks were one of Hunter's favorite parts of their sex life. He could look at them later, run his fingers over them like physical proof of how much Spence wanted him. How much Spence needed him. Unlike all the other guys Hunter screwed around with, Spence wasn't using him for anything.
This was love.
Spence would do anything for him, and the feeling was mutual.
Always had been.
Always would be.
Not even imposter X could tear them apart.
Once Hunter did that crazy asshole’s stupid favor, they’d be done.
Free.
Spence's mouth trailed to the front of Hunter's throat and lapped at his Adam's apple. Nipped at the flesh. His fingers slipped over the smooth leather of Hunter's jacket, but he didn't try to remove it.
That was even hotter than if he had.
"Yeah, you look gorgeous in this. Need you on your knees," Spencer breathed.
Heat flooded Hunter's cock, and he couldn't help but comply.
He fell to the ground and spread his legs.
Spence straddled him, and Hunter's weight rested on the heels of his boots. It strained his dick against the inside of his pants—the pain and pleasure mingling together until they were nearly unbearable.
This is the anticipation he liked.
The thing Spence gave him.
Imposter X thought he knew what Hunter wanted, but he didn’t.
Not really.
Not the way Spence did.
"Here?" Spence asked.
Hunter nodded, any words he said would be begging Spence to do something more. The longer he held off, the better it would be in the end.
Sure, a quick jerk off while they showered together was always fun, but never as fun as this.
Spence stood and yanked the tire iron out of Hunter's boot. "Put your mask on.”
Hunter slid it over his face, flushed from there make out session, and his chest heaved. The air inside the mask was too thick, and he couldn’t get a proper breath.
Spence slipped his own mask over his face and righted it. Only his eyes shone out. Even his lips were hidden under the black fabric. It's like they were strangers, but they still knew each other so intimately.
Spence always knew how to play up Hunter's kinks in the best possible way.
Then, Spence took Molly and slipped her down Hunter's jaw. The cold metal burrowed past the fabric and a shiver rocketed down his spine. Without being able to see Spence's expression, Hunter had no clue what he was thinking.
No clue what came next.
That was part of the fun.
He slid Molly down Hunter's chest. Down and down until it pressed into Hunter’s rock hard cock. “I’m going to keep this right here while you suck me off. Got that?"
Hunter nodded. Bit the inside of his mouth. "Only suck you off? How about you fuck my mouth?"
Spence's other hand snagged Hunter's hair and pulled him close to his groin. "Good idea. Find it with your lips and teeth.”
They played this game before. ‘No hands’ is what Hunter called it in his head.
One of his favorites.
Now, with Spence's shadows, it was even better. Because they wound around Hunter and kept his arms pinned to his sides. Kept him from moving. Before the bond had to be an actual physical thing. They still used them frequently. Handcuffs and leather and stuff like that. The shadows worked in a pinch.
Plus, they were always there.