And now for something completely different!

Okay, so I'm not gonna get Sync & Shadows back from the editor until next week, so I'm gonna post the first chapter then (after it's been cleaned up some).

In the meantime I thought I'd tell you guys something not so secret.

I wrote a non-romance book.

I know. I'm shocked too.

Okay, not really. I wrote 10 fantasy/sci-fi books before I started writing romance, and anyone who's read my books can tell I like writing fantasy, right? Well, I made a leap and thought I'd share.

It's being published under a different name: Z.V. Hunter. So I don't confuse anyone.

I'm pretty proud of it.

You can read a free short prequel story here called Path of Shadows, if you want. Note: you have to sign up for my new mailing list, but you can quit whenever you want. 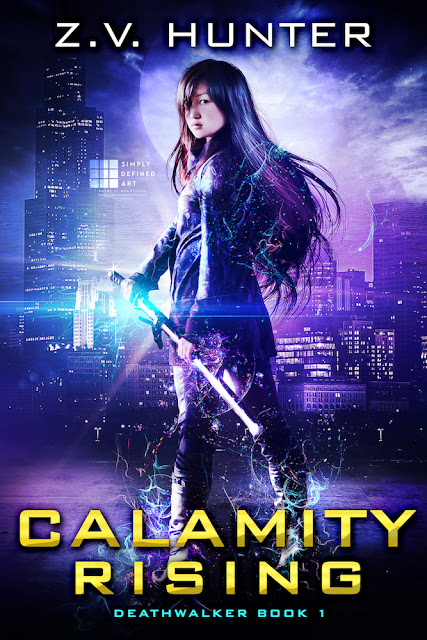 Dead bodies don’t scare me. They can’t curse me, lunge at me or do anything but rot and stink. It’s their spirits that are the problem.

I’m Yukine Nox: necromancer, exorcist, dark mage, and the girl who’s gonna save your ass when spirits come knocking. I see between the veil that separates the world of the living from the Spirit World—a place full of ghosts and supernatural monsters called Calamities.

On the surface, Neo-Tokyo sparkles like an ultramodern jewel, but its roots run deep and dark, tangled in magic. When a powerful Calamity snatches young girls and leaves a trail of angry ghosts in its wake, I take the case. But the more I dig, the more dangers pop-up.

If I don't stop this creature soon, it’ll drape Neo-Tokyo in a veil of death.

It comes out March 27th, which may be before Sync & Shadows. I'm not sure. I hope they launch at the same time so I can go crazy.

Second note: This doesn't mean I'm not writing romance anymore. But I do like branching out. It lets me clear my head a bit.