Dragons and Tigers and Wolves, oh my: Haven City Series Books 4-6 on sale!

Haven City Series Books 4-6 are out and on sale for only 99 cents! 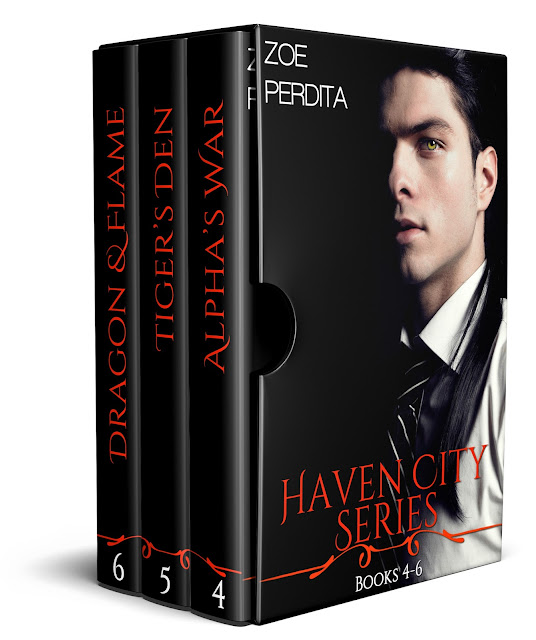 Alpha's War (Haven City Series # 4)
Sebastian knows criminals. He was raised in a family of thieves. But nothing could prepare him for the charming and dangerous gang leader and alpha wolf, Ian Black.
Since Seb isn't strong enough to protect himself, he seeks aid from the Black Wolves – the most infamous shifter gang in the city. While the alpha promises to protect Seb, Ian wants something in return. Seb has to pretend to be Ian's sex slave in public.
Only problem is Seb's straight – or he thought he was. Ian's insistence tests his resolve at every turn.
As violence explodes throughout the city, desire sizzles between the cat and wolf. But giving into passion is difficult for Seb who spent his entire life pushing other people away.
Can these two broken men find love in the midst of chaos?
Tiger's Den (Haven City Series # 5)
Milo, the Black Wolves' omega wolf, always stayed on the sidelines. He's a hacker – not a badass. Hell, he can't even get laid, much less play the part of a dangerous gang member.
But, in order to stop an ongoing gang war, Milo is unceremoniously thrust into the middle of the Tiger's den as a nark (for the cops) and a spy (for the Black Wolves). Not to mention the dead sexy Tiger leader, Xian Fei, insists Milo stay by his side at all times. For protection purposes, of course. Milo's not even sure if he's gay, but Fei makes his stomach do backflips, and his cock – well, that's another story.
Yeah, the omega is pretty sure he's fucked, and he likes it. A lot.
Fei clawed his way to the top of the Tigers after years of serving the desires of others. He's close to ruling his gang in peace, if he can protect the hot little wolf in his care. Problem is – Fei's not sure he can keep his paws off Milo. While Fei plays the confident leader, he's hiding a dark past and a vicious secret.
Milo's the only one who can break Fei's cool – the only one who can bring the tiger to his knees.
Passion burns between Fei and Milo, but will the lies and twisted loyalties tear them apart before they find a happy ending?
Dragon & Flame (Haven City Series # 6)
Rory Sullivan thinks he has it all, until his boyfriend breaks his heart and the new landlord raises the rent on his bar. A chance meeting with Jin Yue, a rich dragon, gives Rory hope. Jin promises Rory he can save the bar and get even with his ex – for a price.
All Rory has to do is pretend to be in a relationship with Jin. Rory's bad boy nature, and the desire for some no-strings-attached sex make the idea way too intriguing. Even if Rory's brain thinks it's a bad idea, his cock heartily disagrees.
Problem is, Jin Yue might be all kinds of hot, but he's also Haven City's one and only crime boss – sexy, powerful and deadly. Now Rory is tied to Jin until the dragon's mission is complete, regardless of assassination attempts, hunters or the cops.
They're playing a dangerous game that puts both of their hearts and lives on the line. While the passion between Jin and Rory sizzles, can a relationship built on deceit grow into something more?