The last Haven City Series Books 7-9 Bundle is on sale!

It's time for another super low priced bundle sale. This one includes the last three Haven City books. 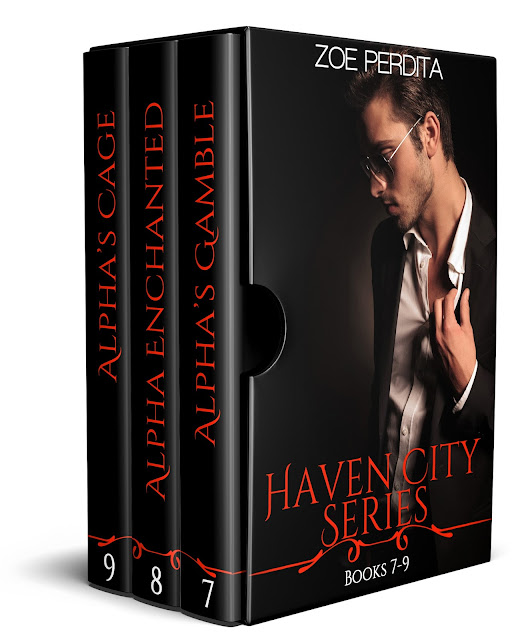 Alpha's Gamble (Haven City Series #7)Davis Harrison ruins things. He was supposed to form a pack and lead as alpha, but that future felt like a cage, so he paved his own path as a gambler who now owes money to the mob. Problem? Yeah. Big time. Especially when repaying old debts puts Davis and everyone he cares about in danger.Enter Davis's best friend and omega wolf, Ken Isben. Ken promised himself not to get involved with Davis and his schemes – that ship sailed a long time ago. Ken has a life, a home and a steady job. But every instinct tells Ken that Davis is his mate, and if he's not there to pick up the pieces, who will? But helping a friend in need is harder than it seems when that friend is as sexy as Davis. Even if Davis claims he's straight that doesn't keep the charming alpha from getting close to Ken in every way possible – igniting hidden desires and rekindling a lust Ken thought he got over years before. The line between friends and lovers blurs, but is it enough to heal their wounds, repair their broken pack and fall in love?Alpha Enchanted (Haven City Series #8)Tyler Harrison doesn't believe in love. Between his fledgling tattoo parlor and an annoying older brother he's got too much shit going on in his life to even think about it. But when he meets Quinn Winters, a mysterious shifter, he realizes he might've been wrong. Even if Tyler assumed he was straight, Quinn fills him with desires he's never known. A desire that tells Tyler, an alpha wolf, that Quinn is his mate. Or Quinn could be his mate if the shifter wasn't bound to someone else – a human. Quinn is one of the last of his kind – a rarity in the Shadow World – and he's spent his whole life as a prisoner to a family he hates. Tyler Harrison is his saving grace, but can an alpha with a broken past really be the one to rescue Quinn, or will they have to rescue each other?Alpha's Cage (Haven City Series #9)Ten years ago, Felan Cage ruined the best thing that ever happened to him. He lost his mate and his brother in the same night, and nothing has ever been the same. Since then, he's buried himself in his work as a history professor and built a strong pack as an alpha wolf, but it's the forgiveness of the man he loves he wants most of all. The man who now hates him. Ari Gold is done dating shifters. They're nothing but a bother – hence the injured ones that show up on his porch at every hour of the night. By day, he runs a quaint antique shop, and he's a skilled healer for the shadow folk, but the last thing he wants is trouble.Of course, trouble finds him.When Ari buys a lot of old junk from an estate sale, he ends up with an item worth millions on the magical black market and a price on his head. Even worse, he has to ask the last man he wants to for help, his ex-boyfriend, Felan Cage.Felan will do anything to help Ari, but can the alpha convince the healer to stop living in the past and learn to love him again?