Another summer sale for you guys!

Get the 99 cent boxed set of Lost Wolves Books 4-6 on Amazon today through August 9th!

Also, have you taken the short reader survey yet? If not, check it out here! Your opinion really helps.

And finally, check out the Work in Progress page here. I finally updated it with what I'm working on. I have 4 new books coming out this fall/winter season. 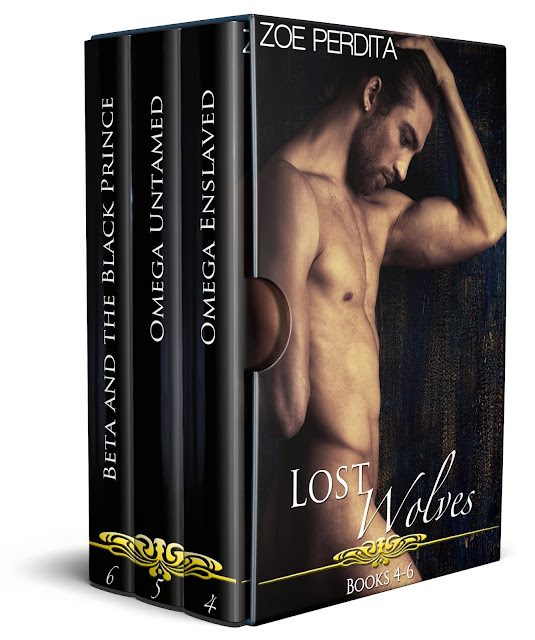 Omega Enslaved (Lost Wolves Book 4)Felix Underwood is an omega, a con man and a (sometimes) assassin enacting revenge for the wrongs that plague his past. However, all that ends when he's captured by Interpol. Imprisoned for months, his only shot at freedom is a dangerous mission to gather information on the infamous alpha wolf, Lucien the Bloody King of Wallachia. When the mission goes south, Felix ends up as a spy in Lucien's clutches. In order to save himself, Felix needs to bring Lucien to his human handlers, but Felix's heart (and cock) tells him Lucien is his mate. His heart sucks. Especially since Felix is straight.Lucien Mircea fought long and hard to become the ruthless alpha king he is today, but Felix challenges all of that. The mysterious omega wolf riles up Lucien's alpha instincts and sets his blood on fire in more ways than one. Lucien swore he'd never fall for a measly omega, yet the thread of destiny (and lust) intertwines them. Hundreds of miles from home and dogged by hunters, Lucien and Felix must work together if they want to survive. Can the alpha and omega overcome betrayal and learn to trust the mate bond that connects them?Omega Untamed (Lost Wolves Book 5)Abel Mircea, an alpha wolf, was banished from his kingdom at 16, but now the king who banished him needs Abel's help to save it. As one of the most fearsome assassins in the world, Abel knows he can do it, but he needs something beyond money or power to make it worth his while.Enter Dagz Thorn-- an omega slave who looks like anything but. He's the only survivor of a vicious attack by hunters working for the warlord Arno, and when Abel saves Dagz, the alpha gets more than he bargained for. Not only does Dagz pledge his life to Abel, he also swears they are mates, bound together by a bond deeper than blood.However, Dagz is not an ordinary omega-- he's a berserker who can't control his outbursts of violence. And now he's Abel's problem. Good thing they have a shit ton of hunters asking for an ass kicking.While lust flares between the alpha and omega, can love bloom in the darkest parts of their hearts?Beta and the Black Prince (Lost Wolves Book Six)Kamil, a beta wolf, has been nothing but loyal to his alpha, Maxim, from the time they were pups. That loyalty is tested when King Lucien calls in his favor to Maxim. Lucien needs someone to hunt down the Ottoman wolf who has the power to destroy his kingdom, and Maxim sends Kamil on the mission.Now, the beta wolf who always stood on the sidelines is now thrust into the center of a dangerous political struggle between two warring shifter kingdoms. At its heart is an alluring and dangerous wolf – Aslan, the bastard son of a Sultan, and the very wolf Kamil was sent to bring to King Lucien.Problem is, that wolf is also Kamil’s mate.Will Kamil betray his king and his mission for a chance at love?
Labels: 99 cents beta and the black prince ebook sale lost wolves book five lost wolves book four lost wolves book six lost wolves series omega enslaved omega untamed